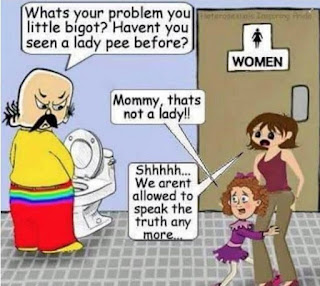 President Barack Obama's royal decree that all States, schools and Americans must abide by his demand that grown men in dresses be allowed to tinkle in the toilet in girl's restrooms beside your daughters, wives and mothers and walk into the showers of girl's locker rooms without a word against it has gone beyond a simple pen and a phone verbal edict.  Congress attempted to put a legislative bite to it, too, also threatening as Obama did a withholding of federal funds.  The attempted extortion against the States and education industry failed.  Congress voted to reject the proposal.

The vote, however, revealed quite a bit.

43 Republicans voted with the Democrats to support the federal government's attempt to justify the mental illness of gender confusion.

Here is a list of the 43 Republicans who voted for the amendment:

-- Political Pistachio Conservative News and Commentary
Posted by Douglas V. Gibbs at 5:53 AM