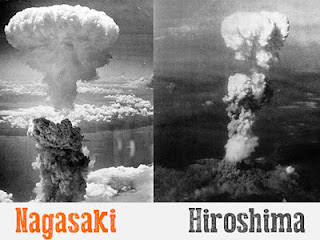 President Obama is in Japan.  While Americans are prepared to thank those who lost their lives fighting for freedom on Memorial Day, Mr. Obama chose to not only abandon any presence in the United States on that important day, but has also decided that his time away during that time should be for the purpose of a Southeast Asia apology tour.  As Americans lay flags and flowers on the graves of our fallen, President Obama laid a wreath at the Hiroshima Peace Memorial on the Friday before Memorial Day Weekend.

The audience in attendance to Obama's anti-nuke visit included survivors of America’s atomic bombing in 1945.  Obama is the first sitting American president to visit Hiroshima.

“Seventy-one years ago, on a bright cloudless morning, death fell from the sky and the world was changed,” Mr. Obama said in opening his speech at the memorial.

“Technological progress without an equivalent progress in human institutions can doom us,” Mr. Obama said, adding that such technology “requires a moral revolution as well.”

Mr. Obama greeted the attendees with hugs and handshakes, likely with a tear in his eye.

While the news media says that the survivors of the atomic bombs dropped on Hiroshima and Nagasaki long for an apology, no apology should be given.  In fact, the survivors should be saying "thank you" to the United States for putting a quick end to a war that would likely have resulted in many more lives lost if the bombs had not been dropped, and for an end to the totalitarian regime that had an evil grip of Japan, and the region, at the time.

While Obama says the bombing of Hiroshima demonstrated that “mankind possessed the means to destroy itself,” the bombing was actually a necessary end-move to stop a bloody World War that was the tool of dictators destroying freedom.

“We must have the courage to escape the logic of fear and pursue a world without them,” he said, although Obama quickly added: “We may not realize this goal in my lifetime, but persistent effort can roll back the possibility of catastrophe.”  Mr. Obama says he is calling for humanity to change its mind-set about war.  “We are determined to realize a world free of nuclear weapons,” he said.

President Obama points blame at America's dropping of atomic bombs on Japan, and the ushering in of the nuclear era.  The reality is that the blame rests on the shoulders of the evil regimes who led the world into World War II in the first place.  Thank God the United States of America was willing to make the difficult decision to drop atomic bombs so as to end the war before more bloodshed as a result of a long conventional firebombing of Tokyo and invasion of Japan's beaches was pursued.

War is not a construct of a virtuous people, but the result of evil in the world.  Because evil exists, the virtuous must face that evil, and fight against it.  War is never preferred, but to hold back evil, it is sometimes necessary.

Imperial Japan brutalized Asia, and any apology regarding Hiroshima and Nagasaki would be inappropriate.  While the Obama administration seems to believe that wallowing and knocking down America a few notches in relation to past decisions by the country during wartime will improve ties with Japan, the reality is that the best way to improve our relationship with Japan would be by protecting Japan from her warlike neighbors in North Korea and China.

If American forces had decided to firebomb Tokyo, and invaded the beaches with various landing operations, the fanatical followers of the imperial government of Japan would have done all they could to repel the landings, and would have not stopped until dead in their desperate fight to stop the American invasion of the Japanese homeland.  They would have kept fighting until they had won, or until all Japanese were killed, because that kind of misplaced honor was more important than the disgrace of surrender.

Justification for the use of the atomic bomb on Hiroshima and Nagasaki was a difficult one to reach.  The question was an eerie one.  Should America keep the terrible reality of their secret weapon secret for possible future use, or humanely end the War with Japan with a massive atomic strike against the war-battered nation that may not surrender, otherwise?

The dropping of the atomic bomb on the two Japanese cities saved hundreds of thousands of lives, and possibly millions of lives - both American, and Japanese.  Without the dropping of the bombs, the War in the Pacific would have continued on for weeks, months, and perhaps years.  The Hiroshima blast killed about 80,000 people, and Nagasaki immediate fatalities numbered at about 45,000.

While the atomic blasts destroyed the central portion of the cities they hit, 85 square miles of Tokyo was destroyed completely by the conventional B-2 firebombing.

If no bombs had been dropped, the fanaticism of the Japanese would have not been broken.  The horrible nature of the atomic bombs forced Japan, for the sake of protecting themselves from further destruction by the atomic bombs, to surrender.  The anticipated loss of 50,000 American lives from a full-blown invasion of Japan was averted.  An untold number of lives in Japan were spared.  If, after such an invasion the Japanese people took to guerrilla warfare in the mountains, it may have taken more than a decade to end the conflict.

The atomic bomb introduced a dramatic new element to the war the Japanese were not prepared for.  They had no choice but to surrender, because unlike their willingness to fight against a conventional invasion, Japan had no answer on how to respond to such a terrible atomic weapon.

As the Japanese must have been considering when they quickly moved to surrender after the dropping of the two bombs, "If 500 bombers could wreak such destruction on Tokyo, what will 500 bombers, each carrying an atomic bomb, do?"

They were not aware that the United States had spent its entire armament of atomic bombs with the attacks on Hiroshima and Nagasaki.

There is no question that the atomic bombings of Hiroshima and Nagasaki were horrible tragedies never seen before in the history of the world.  The exact death toll from the attacks will never be truly known, but including those who died later after the immediate deaths from the blasts from radiation poisoning, at least 200,000 people perished as a result of the dropping of the atomic bombs on Japan.

The truth is, however, that no matter how horrible the aftermath of the only use of atomic weapons in wartime was, President Harry Truman’s decision to use the atomic bombs against Japan ultimately saved lives.