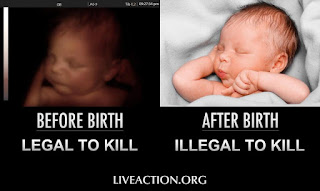 A tabloid in the supermarket aisle read "finally, at 47, Jen is pregnant!"  The rumor was regarding Jennifer Aniston.  I turned to my wife.  "Is that true?"  "Nope," she replied.  "Jen denies it."

I could care less about entertainment industry news or gossip.  But, it caught my attention because of the hypocrisy.

The Hollywood liberal, and all of the rest of the liberal lefties, claim that unborn children are merely lumps of tissue.  There's no baby.  Babies are something that can be thrown away, or is considered a punishment if the couple believes they are not ready.  Yet, all of this hubbub about the possibility that a Hollywood hottie might finally be blessed with a baby.

The liberal democrat leftists defend Planned Parenthood, where the majority of abortions are performed.  They sweep under the rug the racist history of the organization, and go after anyone that tries to expose the organization of any wrong doing.  David Daleiden, the young man who videotaped Planned Parenthood officials in Houston to expose their human body parts racket was sued by the leftists to teach him a lesson for messing with their precious Planned Parenthood, but on June 13 his misdemeanor charge of attempting to buy human organs was dismissed.

The activists, David Daleiden and Sandra Merritt, were indicted on charges of tampering with a government record. Both posed as executives of a fake biomedical research company to tape Planned Parenthood doctors and clinic managers talking about harvesting fetal tissue, according to court documents.

Mr. Daleiden was also indicted under a law prohibiting the solicitation or sale of human organs, which suggests grand jurors thought he went too far in trying to snare Planned Parenthood.

It was a win for pro-life efforts, and undercover journalism.

Planned Parenthood’s illegitimate aim was clear: it hoped to turn attention away from the abortion industry’s baby parts trafficking, by instead attacking the man who exposed its illegal practices.

The Energy and Commerce Committee’s Select Investigative Panel uncovered contracts between Planned Parenthood and StemExpress revealing the two have violated federal regulations regarding the sale of aborted baby parts and the Health Insurance Portability and Accountability Act of 1996 (HIPAA). These recent findings prompted leaders from pro-life organizations to send a letter to House leaders pleading for them to reassign taxpayer dollars currently funding Planned Parenthood.

The panel didn’t only discover violations of fetal trafficking laws. According to the letter, the panel sent a formal complaint to the U.S. Department of Health and Human Services board regarding discovered HIPAA violations, stating that “Each time that an abortion clinic employee shared a medical chart with a StemExpress employee, both violated the HIPAA privacy rule,” because “the disclosures of patients’ PHI made by the abortion clinics, and received by StemExpress, were neither required nor permitted under HIPAA.” According to the panel’s complaint,

The panel also found that even after consent was obtained from the mother to harvest the fetal tissue, “the patient consent form used at Planned Parenthood to get alleged ‘permission’ from pregnant women to harvest their babies’ body parts after abortions ‘was grossly insufficient.’” Although the form claims that aborted baby tissue will be used to treat illnesses like diabetes, Alzheimer’s, AIDS, cancer, and Parkinson’s, such treatments and cures do not exist.

The letter goes on to quote Dr. Lawrence Goldstein, a stem cell scientist at University of California-San Diego and a financial donor to Planned Parenthood who has used Planned Parenthood-provided aborted fetal brain in the past. At the March 2016 “The Bioethics of Fetal Tissue” Select Investigative Panel hearing, Goldstein admitted that the language of cures and treatments on the patient consent forms was “an inappropriate statement that should not have been made on that form. I don’t know who wrote it, that would not have made it past my IRB.”

As the authors of the letter noted, “with approximately 25,000 patients seeking abortions and pregnancy tests at Planned Parenthood Mar Monte each year,” this Planned Parenthood location alone exposed the private medical information of “hundreds of thousands of women” in its partnership with StemExpress.

Calling these arrangements “nothing short of barbaric,” the letter went on to include excerpts from emails between StemExpress and Planned Parenthood employees the Select Panel discovered:

Planned Parenthood provided such intimate access to StemExpress into its patient medical records that the company could email customers from the clinic offering what fetal ‘specimens’ were available to purchase that day. ‘There will be some potentials tomorrow, would you like to be on the schedule?’ a StemExpress representative emailed in reply to a customer’s grim query: ‘How is the pancreas forecast today – any possible procurements?’ Another StemExpress customer emailed on April 13, 2015: ‘i [sic] also wanted to put in another order of 4 normal fetal brains distributed as before […] please send me a quote for the same.

While these representative findings are from merely a few Planned Parenthood locations, such as Mar Monte, the letter added the Select Panel has discovered that such illicit behavior is prominent throughout the country, with almost 1 in 5 abortion clinics selling fetal tissue to StemExpress as of last year.

The letter concluded with a plea to reassign taxpayer funding to the “13,000 Federally Qualified Health Centers and Rural Health Centers across the country that provide comprehensive, full-spectrum health care regardless of patients’ ability to pay.”

“They outnumber Planned Parenthood clinics nearly 20 to 1. There is no need, and no justification whatsoever to continue to spend over half-a-billion taxpayer dollars each year on Planned Parenthood’s lawless and unaccountable abortion business.”

Twenty pro-life leaders signed this plea, including Tom McClusky of the March for Life Education and Defense Fund and David Daleiden of the Center for Medical Progress.
-- Political Pistachio Conservative News and Commentary