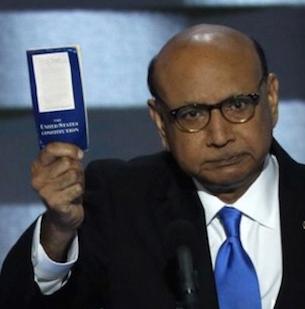 A woman came up to me at a Unite IE meeting last night very concerned about the attack Khizr Muazzam Khan laid on Trump with his "the Constitution forbids a 'religious test' in the vetting of immigrants" claim.  "Is it true?" she asked.

Khizr Khan is the father of a deceased Muslim U.S. soldier who slammed Donald Trump during his Democrat National Convention speech, claiming the GOP nominee lacks empathy and a moral compass.  The media has been all over it, saying that Trump attacked the father of a U.S. war hero.  As Khan levied his attack against Trump, the Republican nominee in the 2016 Presidential Election tweeted, "Mr. Khan, who does not know me, viciously attacked me from the stage of the DNC and is now all over T.V. doing the same - Nice!" Mr. Trump followed up with, "This story is not about Mr. Khan, who is all over the place doing interviews, but rather RADICAL ISLAMIC TERRORISM and the U.S. Get smart!"

Mr. Khan is also, it is being said, connected to the Muslim Brotherhood.

I turned to the woman and said, "No, Kahn is very wrong."

The clause that addresses "religious tests" in the U.S. Constitution is in Article VI where it states, "The Senators and Representatives before mentioned, and the Members of the several State Legislatures, and all executive and judicial Officers, both of the United States and of the several States, shall be bound by Oath or Affirmation, to support this Constitution; but no religious Test shall ever be required as a Qualification to any Office or public Trust under the United States."

That clause specifically addresses those holding office at the federal level, or the State level, or holding any other position in the federal government considered to be under the public trust.  It does not apply to the general public.
The other clause that addresses this issue is Article I, Section 9, which addresses both the Atlantic Slave Trade, and Immigration.  In that clause it reads, "The Migration or Importation of such Persons as any of the States now existing shall think proper to admit, shall not be prohibited by the Congress prior to the Year one thousand eight hundred and eight."

Prior to the writing of the U.S. Constitution the several States held all of the authorities regarding every single issue.  Through the writing of the Constitution the States legally transferred some of their powers to the federal government so that it may function in the manner it was created for.  Both immigration and slavery were hot button issues of the day, and the States were not so readily willing to hand over those authorities to the new central government.  As a compromise, to give the States time to adjust, the Congress' new authority of being able to limit immigration, or the import of slaves, was put off until 1808.  Once January of 1808 came, Congress had the authority to both limit the Atlantic Slave Trade, and limit immigration as it saw fit.

The Atlantic Slave Trade was abolished on January 1, 1808.  Congress has also used their power to limit immigration on a number of occasions.  In the clause, however, you will notice that the prohibitions Congress may legislate carry no conditions, including "religious tests."  In other words, based on the language of Article I, Section 9, Congress can limit immigration through proper legislation any way they want.

A couple recent examples of Congress acting upon this authority occurred during World War II, and during the Iranian Hostage Crisis.

In the case of World War II, Congress passed legislation to prohibit Germans, Italians and Japanese from immigrating into the United States.  We were at war with Germany, Italy and Japan, so the decision to prohibit immigration from those countries made sense.  We had to guard against infiltration, and a prohibition against those three groups when it came to immigration was a part of that strategy.  It might be well to note that the prohibition was passed by a Democrat majority Congress, and signed by Franklin Delano Roosevelt, a leftist Democrat President.

During the Iran Hostage Crisis in 1979, Congress banned Iranians from immigrating into the United States, and the law was signed by Democrat President Jimmy Carter.  The ban was not put into place because the U.S. Government was trying to be insensitive, nor was it about being racist.  We simply could not separate the good Iranian immigrants from the bad ones.

Islam, regardless of whether or not there are peaceful Muslims who stand against the jihad, has declared war on the United States.  Terrorism is a problem that has been accompanying Muslim refugees in Europe, and is beginning to rear its ugly head here, as well.  Jihadists poison the refugee population, therefore, until we can figure out a way to absolutely determine who is good, and who is bad, a ban on all Muslims may be necessary.

As Ben Carson so eloquently provided, "If you knew there were three poison M&Ms in a large bowl of the candy, would you eat any of the M&Ms?"

Congress has the constitutional authority to ban Muslim immigration, just as States have the right to ban the building of any more mosques because of the political connection they have to radical Islam.

While Muslims try to use our Constitution against us, the reality is their arguments are empty.  They cannot use against us what they don't fully understand, and what was written to protect us against totalitarian ideologies like theirs.

-- Political Pistachio Conservative News and Commentary
Posted by Douglas V. Gibbs at 12:38 AM