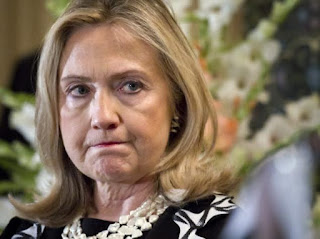 When people have secrets, they can be manipulated. Intimidated. Extorted. Blackmailed.

The more we learn about Hillary Clinton, her emails, and the Clinton Foundation, the more we realize she is hiding a lot.

With the recent Anthony Weiner revelation that has encouraged the FBI to reexamine the Clinton email scandal, we must realize that the very fact that Hillary Clinton has so much to hide makes her a national security risk should she attain a new position of power. . . especially if she becomes President of the United States.  Never mind whether or not she can be bought - it turns out she can be blackmailed.

Hillary Clinton couldn't even pass a basic background check if she wanted to be a janitor in a government building, yet we have voters willing to make the most crooked, corrupt and untrustworthy politician in this country's history a return resident to the White House.  For the intelligence community, the fact that she has so much to hide, and that it can be used to intimidate the United States and blackmail her, creates an intelligence nightmare.

She had access to highly classified information, and purposely used her private email server (among other things) to sell that information for favors, or future contributions to her and her husband, often in the form of exorbitant speaking fees and donations to the Clinton Foundation.

Understand, this is not just a risk regarding foreign characters.  Evil exists within, as well, and the ability of actors both international and domestic to use her for their own evil and destructive means through blackmail places the United States (should she become President) at a level of risk never seen before in our history.

While the FBI swears they can't find proof Hillary's private email server was hacked into by bad guys, the reality is that means she likely allowed that information to be accessed, and she's hiding that fact.  However, there are those out there who know the truth.  What price will Hillary be willing to entertain to ensure that information regarding her treasonous activities doesn't get out to the general public?

Wikileaks has been revealing much of what Hillary has been hiding, but understand that so far, according to Assange, none of those leaks came from Hillary’s personal account - which means the real corruption hasn't even been seen, yet.  We have barely been exposed to the tip of Hillary's corruption iceberg.

It also means that the information wasn't hacked by the Russians like the Democrats keep saying.  The information regarding her emails that is being exposed is out there among accounts of various bad actors, floating around to be used, and abused.  Her exchange of favors through the Clinton Foundation, and the State Department when she was Secretary of State may now be beginning to haunt us as a country, and imagine how sever that haunting will become if she becomes President of the United States.  Hillary in the White House would accelerate the danger of enemies of America using what she knows, and what they know she doesn't want us to know, placing at serious risk the security of this country.

The blackmail card was nearly played regarding Bill Clinton's sexual escapades, and it will be used against Hillary.  Blackmail is always the card played by bad actors when someone has something they are trying to hide - especially when that thing being hidden is treasonous.

-- Political Pistachio Conservative News and Commentary
Posted by Douglas V. Gibbs at 12:13 AM