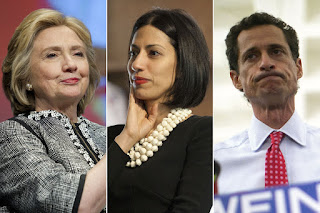 Nothing like more scandals to expose Crooked Hillary for what she really is.

The presidential campaign was rocked on Friday after federal law enforcement officials said that emails pertinent to the closed investigation into Hillary Clinton's private email server were discovered on a computer belonging to Anthony D. Weiner, the estranged husband of a top Clinton aide (Huma Abedin).

Hillary Clinton’s allies were cast into a state of anger and disbelief over the FBI’s stunning announcement that it is reviewing new emails “pertinent” to Clinton’s use of a private email server.

That shocking development — revealed in a letter to Congress by FBI Director James Comey — pushed some of Clinton’s allies past the boiling point.

They said they were “dumbfounded” by the revelation that the new FBI review may have been spurred by a separate investigation into Anthony Weiner sending lewd texts to a minor. Weiner is separated from wife Huma Abedin, one of Clinton’s closest aides.

WHY NOW?
There is no question that re-opening the FBI Investigation into Hillary Clinton’s email server is a big deal. The FBI normally avoids acting just before an election in order to avoid charges of political manipulation.  NBC reports: The FBI is reviewing a new batch of Hillary Clinton emails, bureau director James Comey said in a letter to the Senate Judiciary Committee on Friday. "In connection with an unrelated case, the FBI has learned of the existence of emails that appear to be pertinent to the investigation … I agreed that the FBI should take appropriate investigative steps designed to allow investigators to review these emails to determine whether they contain classified information, as well as to assess their importance to our investigation," he wrote. The very first thing to note is that Comey made no mention of a grand jury.  The emails whose existence he learned of may have been the result of a subpoena in another investigation.

Lynch expressed her preference that Comey follow the department’s longstanding practice of not commenting on ongoing investigations, and not taking any action that could influence the outcome of an election, but he said that he felt compelled to do otherwise.

Two sources close to the investigation said the latest emails were discovered not during an investigation into Clinton, but rather as part of a separate probe into Anthony Weiner, the estranged husband of top Clinton aide Huma Abedin.

The FBI has been investigating illicit text messages allegedly sent from Weiner to a 15-year-old girl in North Carolina, and found the Clinton emails on a device related to that investigation, the sources said.

Abedin told federal investigators in April that she used several email accounts for her work, including a Yahoo email, according to a summary of the interview released by the FBI in September. She said it was difficult to print from the State Department's email system so she routinely forwarded documents to her private accounts when she needed to print them out, according to the summary.

Abedin announced her separation from Weiner in August after a sex scandal similar to an earlier incident that led him to resign from the U.S. Congress.

TENS OF THOUSANDS OF EMAILS

With furious Democrats - and the Clinton Campaign - now openly blasting the FBI's reopened investigation (as Republicans take delight for once in having a government agency reinforce their side of events), the question turns to just what emails were found on Weiner's laptop, and how damaging their contents are for the FBI to take the unprecedented step of "intervening" in a major political event just days before the national election.

We first laid what was the most likely explanation yesterday, when we showed several examples of Huma Abedin emails being sent from her work email account to her personal account at humaabedin@yahoo.com, courtesy of a Judicial Watch FOIA release. Of the more than 160 emails in the latest Judicial Watch release, some 110 emails – two-thirds of the total – were forwarded by Abedin to two personal addresses she controlled. The Washington Times reported in August 2015 that the State Department had admitted to a federal judge that Abedin and Mills used personal email accounts to conduct government business in addition to Clinton’s private clintonemail.com to transact State Department business.

One email from May 15, 2009, was sent by Abedin from her State Department email to her personal email. Abedin was archiving in her personal email account an email Hillary Clinton sent her from Clinton’s private email server at HDR22@clintonemail.com. Abedin was asked to print out attachments to an email Mills sent via a private address the previous day to Clinton involving “timetables and deliverables” for her review via Alec Ross, a technology policy expert who then held the title of senior adviser for innovation to Secretary Clinton.

FBI Director James B. Comey under fire for his controversial decision on the Clinton email inquiry

FBI Director James B. Comey decided to inform Congress that he would look again into Hillary Clinton’s handling of emails during her time as secretary of state for two main reasons: a sense of obligation to lawmakers and a concern that word of the new email discovery would leak to the media and raise questions of a coverup.

The rationale, described by officials close to Comey’s decision-making on the condition of anonymity, prompted the FBI director to release his brief letter to Congress on Friday and upset a presidential race less than two weeks before Election Day. It placed Comey again at the center of a highly partisan argument over whether the nation’s top law enforcement agency was unfairly influencing the campaign.

In a memo explaining his decision to FBI employees soon after he sent his letter to Congress, Comey said he felt “an obligation to do so given that I testified repeatedly in recent months that our investigation was completed.”

-- Political Pistachio Conservative News and Commentary
Posted by Douglas V. Gibbs at 10:15 AM