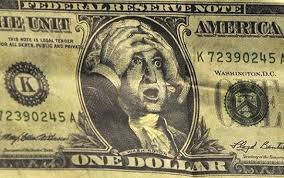 The Founding Fathers, during the Constitutional Convention in 1787, created the federal government, and gave the new central government absolutely no authorities regarding American Economy except for the following clauses (All found in Article I, Section 8, and the authorities are only granted to Congress - not a central bank like the Federal Reserve, and not to the other two branches of government, executive or judicial):

1.  Congress shall have Power To lay and collect Taxes.  In Article I, Section 9 a clarification is applied, explaining that the federal government could not lay a direct tax against the people.  That clause was superseded by the 16th Amendment during the Progressive Era.

2.  To borrow Money on the credit of the United States.  During the convention, according to James Madison's notes, it was assumed that borrowing money would only occur during time of war.  Statist Alexander Hamilton, however, argued that the United States should be in perpetual debt to not only to build the country's credit, but also as a means of discouraging States from seceding from the Union.

4.  To establish...uniform Laws on the subject of Bankruptcies.  This was intended to prevent abuse of bankruptcy laws in States by simply moving to a different State in an attempt to escape said bankruptcy.

5.  To coin Money, regulate the Value thereof, and of foreign Coin.  Note that the Constitution does not authorize paper money, nor a central bank like the Federal Reserve.  Alexander Hamilton, however, was able to convince President Washington and his allies in Congress to create the Bank of the United States with his unconstitutional argument regarding "implied powers."

That's it.  There are no authorities granted to the federal government to regulate banks as we saw with Dodd-Frank, nor are there any authorities granted for the federal government to interfere in the market in any other ways.  If it is necessary for "regulations" to be created regarding the behavior of businesses or corporations in order to protect workers or the consumers, the authority lies solely with the individual States.

The economy was expected to be of the people and by the people.  A free and dynamic market where government had almost no influence, and where people were capable of moving up and down in the system based on their hard work and successes or failures.

In free market systems, when the central government remains out of the picture, a middle class naturally emerges.  While larger companies, and the very wealthy at the top of those corporations, carry a lot of power in such a system, the free market self-regulates based on consumer buying habits and the natural cycles associated with supply and demand.  Problems arise when corporate giants use their money to buy political favors - which is why the Founding Fathers wanted government not involved in the natural cycles of the economy as much as possible.  Heavy taxation against the market system is also destructive, leaving less capital in the system for growth, innovation, and product development.

This is not to say there should be no rules.  As stated earlier, there are some authorities granted to the federal government regarding economic matters.  However, the majority of the rule making, if there must be governmental participation, is authorized to the local governments, the States, counties and cities.  Localism is the key to a successful society, be it in reference to liberty, or economic prosperity and stability.  As per the 10th Amendment, if an authority does not belong to the federal government, and is not prohibited to the States, it is a State authority - thus, reinforcing the concept of localism.

It is best to let the market naturally regulate itself, however.  Local rules must be sparingly applied.

Liberal leftists claim that conservative methods regarding a free market economy means allowing control by the big corporations, but as stated earlier, the true regulatory power belongs to the consumers who are capable of making, and breaking, any business venture - big, or small - through their buying habits, and buying preferences.

That all said, exceptions do exist in terms of federal intrusion.  There are times when disputes between the States actually hinder the movement of commerce.  In those cases, it is the job of Congress to mediate, find common ground between the parties, and issue legislation establishing a new agreement regarding the movement of commerce that is acceptable to all parties.

Venezuela is a most recent example of government control of the market leading to poverty, and economic collapse.

Another example of liberalism destroying hope, an economy, and an orderly society is San Francisco.  Years of liberal policies have the city in economic trouble, and in the midst of a societal breakdown.

The hope, then, is that the new Trump administration will help reverse the big government trend, and return the economy to where it belongs. . . to the people.  However, that will only happen if the federal government begins to withdraw from its influence of the economy.

You might be interested in reading a series of post on my blog from a few years ago that dealt with this subject. This is the link to the first one. The rest follow.