Trump and the Emolument Clause 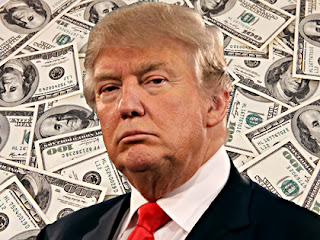 Emolument is defined by the 1828 Webster's Dictionary as: 1. The profit arising from office or employment; that which is received as a compensation for services, or which is annexed to the possession of office, as salary, feels and perquisites.  2. Profit; advantage; gains in general.

Compensation is defined by the 1828 Webster's Dictionary as: 1. That which is given or received as an equivalent for services, debt, want, loss, or suffering; amends; remuneration; recompense.  All other debts may compensation find.  The pleasures of life are no compensation for the loss of divine favor and protection.  2. In law, a set-off; the payment of a debt by a credit of equal amount.

In the Constitution, Compensation appears in:

• Article I, Section 6: Senators and Representatives shall receive a Compensation for their Services, to be ascertained by Law, and paid out of the Treasury of the United States.

• Article III, Section 1: The Judges, both of the supreme and inferior Courts, shall hold their Offices during good Behaviour, and shall, at stated Times, receive for their Services, a Compensation, which shall not be diminished during their Continuance in Office.

In the Constitution, Emolument appears in:

• Article I, Section 6: No Senator or Representative shall, during the Time for which he was elected, be appointed to any civil Office under the Authority of the United States, which shall have been created, or the Emoluments whereof shall have been encreased during such time; and no Person holding any Office under the United States, shall be a Member of either House during his Continuance in Office.

• Article I, Section 9: No Title of Nobility shall be granted by the United States: And no Person holding any Office of Profit or Trust under them, shall, without the Consent of the Congress, accept of any present, Emolument, Office, or Title, of any kind whatever, from any King, Prince, or foreign State.

In the first appearance of "emoluments" in the Constitution it refers to salaries for positions in the government like "Secretary of State," giving the term "emolument" more of a salary definition, rather than that of a compensation.  In Article I, Section 9, the latter part of that paragraph is known as the "Emolument Clause," and is the one being referred to regarding Donald J. Trump's international personal economic benefits as they pertain to his role as a businessman.  In Article II, Section 1 the appearance of "emolument" is for the purpose of explaining that while the President is receiving compensation for his services, it is illegal for him to receive a salary from any other federal office, or State office.

In the news, the Emolument Clause being targeted by the opponents of Donald J. Trump is Article I, Section 9: "No Title of Nobility shall be granted by the United States: And no Person holding any Office of Profit or Trust under them, shall, without the Consent of the Congress, accept of any present, Emolument, Office, or Title, of any kind whatever, from any King, Prince, or foreign State."

First of all, it amazes me how, when they think it serves their purposes, the Democrats become strict constitutionalists, sometimes.

Second, Barack Obama has violated the Emolument Clause repeatedly.  According to Congress, one of those offenses was when he won the Nobel Peace Prize.  Though he donated the cash prize to charity, the very fact that he received those monies from a foreign source without congressional permission means he violated the clause, or at least that is what members of Congress said.  The Justice Department concluded that because the prize was awarded by the Nobel Committee, which is not an "agent or representative of the Norwegian government," there was no violation.  Was that a sound conclusion, or a friendly nudge of assistance by the United States Attorney General, who was Barack Obama's buddy, Eric Holder, at the time?

The Founding Fathers included the Emoluments Clause in the U.S. Constitution because they wished to reduce foreign influence on our government as much as possible.  They were, at the time, dealing with a Tory population that, though most of them had fled to Britain after the war, sought to undermine the new government.  Great Britain failed to recognize the sovereignty of the United States, and considered the Constitution a traitorous act against The Crown.  While trade with other nations, and even business dealings with other nations, were allowed, anything beyond what was for the immediate benefit of the local economy was frowned upon.  The original 13th Amendment, in fact, which was somehow scrubbed from the pages of the United States Constitution shortly before the War Between the States, penalized citizens with the loss of citizenship should they accept a foreign title (such as knight).

America’s founding fathers heavily worried about the potential problem of corruption in the new constitutional government. Outside influence through the gift of money or physical presents by wealthy persons and powerful governments had doomed republics earlier in history.  They saw the exchanges of gifts and money for diplomatic reasons a component of the kind of aristocratic and monarchical rule that plagued Europe.  How could an officeholder serve the people when one has the privileges of a noble?

When the king of England granted titles and salaries to loyalists, wrote John Adams, it turned the crown itself into a “private interest”.

The Founding Fathers considered royalty, and anything that suggested a potential connection to it, a conflict of interest when it came to a system of liberty, and the kind of ruination that could be detrimental to the survival of the fledgling United States government.

American government representatives receiving foreign gifts were considered dangerous, but the giving of such gifts in Europe were routine in diplomacy.  The delegates in the Constitutional Convention of 1787 decided to follow a model provided by Holland, another republic influenced by a Saxon history of limited government, and the belief that nobody is above the law, even a king. In 1651, the dutch had adopted a ban on gifts for its ambassadors unless they were declared and approved by parliament.

Recognizing the fuss being brought by the Democrats about the Emolument Clause, Mr. Trump tweeted on November 30th that he will be “leaving [his] great business in total”.  While Mr. Trump has not explained exactly what that means, all evidence points towards him handing over control of his business dealings to his children.  "Experts," and  America’s Office of Government Ethics, believes he should sell (or give away) his business interests to parties not connected to him.

While the primary concern of the Founding Fathers was foreign gifts and bribes, the emolument clause pretty much covers all personal economic benefits one might receive from foreign governments.

Does that include if a foreigner stays at one of Trump's hotels?  How about the fact that the Industrial and Agricultural Bank of China, whose majority stakeholder is the Chinese government, rents office space in New York City’s Trump Tower? How about the fact that Trump is working on erecting a new 35-story Trump Office Buenos Aires development, and the only thing holding it back at the moment is the fact that it is awaiting final approval from that city’s government?

Questions regarding the Emoluments Clause are nothing new.  Past presidents have worked hard to avoid even the appearance of conflicts of interest.  President Martin Van Buren was gifted horses, rugs, pearls and other goods from the Imam of Muscat.  Van Buren had a special resolution from Congress passed to let him split the goods up between the State Department and the Treasury.

Today's political quagmire has become a veritable minefield of bribes and behind-closed-door dealings.  Private financial interests can subtly sway even the most virtuous leaders. The Emoluments Clause was written because the Founding Fathers understood human nature, and despite how evolved we may think we are, the nature of the human condition and the reality of government places us at a constant risk of outside meddling by the powerful opponents of our liberty.

Trump’s vast global scope of business interests, many of which remain shrouded in secrecy, may very well pose themselves to be a potential danger if Donald Trump does not decide to totally divest himself from them.

Congress, of course, can also use legislation to allow Trump to continue to receive what he receives through his business dealings.  The question is, in that case, Do we trust Donald Trump will not use his business relationships in an unethical way while serving as President of the United States?

Congress would have to affirmatively decide what it is willing to live with in the way of Trump conflicts.

The problem with all that I've written, however, is that some of it may not matter, in the first place.  We are dealing with interpretations, and legal rulings.  But what does the Constitution actually say in the Emoluments Clause?

Article I, Section 9: No Title of Nobility shall be granted by the United States: And no Person holding any Office of Profit or Trust under them, shall, without the Consent of the Congress, accept of any present, Emolument, Office, or Title, of any kind whatever, from any King, Prince, or foreign State.

Did you catch the end, there?  "from any King, Prince, or foreign State."

While the Industrial and Agricultural Bank of China, whose majority stakeholder is the Chinese government, rents office space in New York City’s Trump Tower, they are not paying Trump directly.  His emolument comes from the overall profit of that building.  Business income not received from government sources are totally fine.  After all, were not the early politicians of America's earliest days farmers and shopkeepers and professionals with law practices and doctor's offices?  They could, after all, receive payment for their services as private individuals (as long as those payments were not directly from kings, princes, or a foreign government) - though as President these persons set aside their businesses completely, or to family, while they served.

It goes back to the argument the Department of Justice made regarding Barack Obama's emolument for the Nobel Peace Prize, right?  The Justice Department concluded that because the prize was awarded by the Nobel Committee, which is not an "agent or representative of the Norwegian government," there was no violation.

This doesn't, of course, get Trump completely off the hook.  Situations like the new 35-story Trump Office Buenos Aires development waiting for approval from that city’s government could be a sticky situation.  Approval could be seen as a gift from that government to the new President.  Therefore, either Trump needs to separate himself from those situations, somehow, or Congress needs to pass resolutions saying, "Naw, that one is fine.  We give our consent."

Congress will need to deal with this as necessary, and Trump will need to divest where necessary, but in all honesty, the problem is not nearly as large as the liberal left is making it out to be.  However, it's huge to them, while the Nobel Peace Prize wasn't, simply because of trust.  They trusted Obama.  They don't trust Trump.