Gorsuch by the end of the Week? 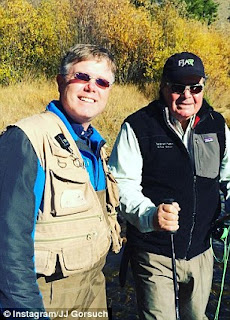 Most sources I have had a chance to be in contact with have all indicated to me that the Senate will vote on the confirmation of Tenth Circuit Court of Appeals Judge Neil Gorsuch to the Supreme Court before the end of the week.  The revelation of the dishonesty of the Democrats which has emerged through the criminality of Susan Rice (especially in relation to the Trump Surveillance question) has a lot of Democrats nervous.  Of the remaining eight undecided Democrats, the Republicans need six of them to vote for cloture if Gorsuch is going to be confirmed without the nuclear option.  Many insiders believe the GOP will get their six because some Democrats who fear losing their seat in the House of Representatives in the next election may wish to distance themselves from the concept of obstructionism being practiced by their Democrat Party colleagues.

The nomination of Judge Gorsuch, and the time it has taken the U.S. Senate to confirm him, has stretched, so far, to more than two months.

Truthfully, the Democrats are not battling against Gorsuch because they think he is not a reasonable nomination.  They had no complaints when he was confirmed to the 10th Circuit.  It was July 20, 2006 when Judge Gorsuch was confirmed by the U.S. Senate to the Tenth Circuit U.S. Court of Appeals by a voice vote, without recorded opposition.  Eleven of the current Democrat Senators, including current Minority Leader Chuck Schumer who is now screaming in opposition to Gorsuch, were in office when Judge Gorsuch was confirmed (and they were good with Gorsuch at the time).

Judge Gorsuch is under assault simply because he is a Trump nominee, and the Democrats are doing all they can to sabotage the Trump presidency. The liberal left political party has created a narrative that, while not grounded in any evidence or truth, portrays the Republican President as a danger to America.  In reality, Donald J. Trump is a danger to their socialist plans for the United States, and they can't figure out how to control him, buy him, nor get rid of him.

Trump's choice of Gorsuch for the Supreme Court, while not my first choice from the original long list of candidates, is very much the kind of justice that would be in the same mold as the late Justice Antonin Scalia.  Aside from a few things that caught my attention that had me wondering about Gorsuch, all indications reveal that he will likely rule based on originalism; recognizing the text of the U.S. Constitution to mean what was originally meant by the authors of the document in 1787.

In other words, Gorsuch decides cases based on the law as it is written, rather than launching an attack on the law itself by using his opinion, be it political or personal, to twist the law or create unwritten rights he may believe should be rights, despite not falling under the four characteristics presented in the Declaration of Independence.

He recognizes that the Legislative Branch has the sole constitutional authority of legislative powers: “In our legal order it is for Congress and not the courts to write new laws. It is the role of judges to apply, not alter, the work of the people’s representatives. A judge who likes every outcome he reaches is very likely a bad judge, reaching for results he prefers rather than those the law compels.”

During his ten years on the Tenth Circuit Court of Appeals, Judge Gorsuch demonstrated a robust record of conservative jurisprudence.  He used constitutional arguments to uphold religious liberties, specifically when it came to the rights of employers to not pay for health insurance plans that violated their religious beliefs in the cases of Hobby Lobby v. Burwell and Little Sisters of the Poor v. Burwell.

Judge Gorsuch has proven to be a qualified nominee who believes it is his job to apply the law, not twist it, and with that he also carries a long list of credentials from education, to the positions he's held.

According to the Heritage Foundation, Neal Katyal, who served as acting solicitor general in the Obama administration, said regarding Gorsuch:

“I have no doubt that, if confirmed, Judge Gorsuch would help to restore confidence in the rule of law. His years on the bench reveal a commitment to judicial independence — a record that should give the American people confidence that he will not compromise principle to favor the president who appointed him.”

As for the Democrat Party's threat of a filibuster, over the weekend, Senate Majority Leader Mitch McConnell explained that “filibustering judges at all is a rather recent phenomenon” and noted that Justice Clarence Thomas was confirmed 52 to 48, and even though he was controversial at the time, “not a single senator said, ‘He has to get 60 votes.’” The Senate should carry out its ‘Advise and Consent’ role and confirm Judge Neil Gorsuch to the Supreme Court.

The filibuster rule, and the concept of cloture, while theoretically around since the first Senate in 1789, first became a legislative weapon under Woodrow Wilson, and his Democrat dominated Congress, in 1917.

-- Political Pistachio Conservative News and Commentary
Posted by Douglas V. Gibbs at 4:26 AM