Politics is an ugly game, and it has become uglier since the election of Donald J. Trump.  The liberal left in the United States has become completely unhinged.  However, we must understand that the election of Donald J. Trump did not create the Democrat Party's sudden fits of anger, or sudden willingness to participate in violence as they scream hateful things and verbalize brutal death threats. . . his election to President of the United States revealed that that is who they really are.  Now, trying to figure out what to do with all that anger when it is also turned against their own Democrat Party members, the mainstream media is confused and are "all a twitter" because Democrat Party Speaker of the California Assembly received death threats for killing the Single-Payer bill trying to work its way through the Democrat Supermajority in Sacramento.

SACRAMENTO, Calif. (KCRA) —
A heated rally on Wednesday brought dozens of supporters of universal health care to the Capitol -- many were holding signs showing the California state bear getting stabbed in the back.
The violent symbol was a direct message to California Assembly Speaker Anthony Rendon, who is also the target of death threats.
“Rendon, Rendon shame on you,” protesters shouted outside of Gov. Jerry Brown's office. “Action now on 562."
Twitter Ads info and privacy
The protesters are angry at Rendon for cancelling an Assembly vote on Senate Bill 562 -- a single-payer plan that would have required the state government to pay the health care costs for all California residents.
Robert Krueger of Grass Valley was one of the protesters holding a sign with the stabbed bear.
“We feel like he's stabbing the California citizens in the back,” Krueger said.
Krueger and many others are upset because Rendon scuttled the Assembly vote after it had breezed through the state Senate.
“It's a program that has a price tag up to $400 billion and there's no identified funding source for this,” Rendon said Wednesday.
He said the single-payer health care bill is “more than double the entire California state budget.”
Rendon said he received death threats on social media.
“You just killed my son. This means war,” one post said.
“Burn him at the stake,” another post read.
A third message warned Rendon, “This is a good way to get guillotined in a public square.”
“I'm not terrifically surprised by that,” Rendon said. “I'm a little bit surprised that they threatened my family.”
“It’s troubling," he added. "But again it’s par for the course. I think it’s more troubling to read about someone whose family is sick and they aren’t going to receive coverage.”
Rendon said he understands the public anger.
“I realize that people are suffering right now. I realize that people are scared. I realize that people are uncertain about the future.”
Rendon also said the bill’s sponsors are misleading the people of California.
The liberal left is so violent and foaming-at-the-mouth rabid that they are now even willing to go after their own if the communist agenda is not put into place now.

As a conservative and constitutionalist, especially one in the public eye, threats by the liberal left against me is a common occurrence.  My hate mail folder is a pretty fat one.

I was recently accused of not only being a "piece of sh**" on my radio program, but in the same letter addressed to the owner of the radio station I am on, I was labeled a liar and a fraud regarding a recent worker's compensation case I was a part of, and it was recommended the owner throw me off the station.  By the way, I lost the court case in question despite my bout with chronic pain (often sciatic nerve pain), and MRIs which show the damage - I was beat by a corrupt industry, deceptive lawyers, and an employer who took my case so personally he was willing to pump a lot of money into leaving me with nothing but the pain I continue to battle.

When I spoke to a Riverside County apolitical group that existed for the purpose of uniting Riverside County business people, a few years ago, after looking me up, some of the liberal left members of the group stood outside the door of the venue telling people not to go in because a "dangerous right-wing extremist" was inside giving a presentation on the "oppressive constitution."

After an episode of my radio program a bunch of years ago (online before I made the move to AM Radio), a person came to my home in the middle of the night, ripped off my side-view mirror on my pick-up, blacked-out a "NObama" bumper sticker in my back window, and painted in white spray paint on the tail-gate "BIGOT". The police, and FBI, refused to investigate because there was a lack of evidence.

Those are just a few of the nasty things I've encountered, and as bad as I think it can often get, I couldn't even imagine how hard it must be to be a political figure - especially politicians for the Republican Party, and especially here in loony California.

Melissa Melendez, my assembly representative in Sacramento, after hearing about how the media is crying because Democrat Speaker Anthony Rendon received some threats, revealed that she gets them too. . . but the media doesn't care when a member of the GOP is threatened (and in some cases the leftist democrats wish for violence, and even death, against Republicans). . . 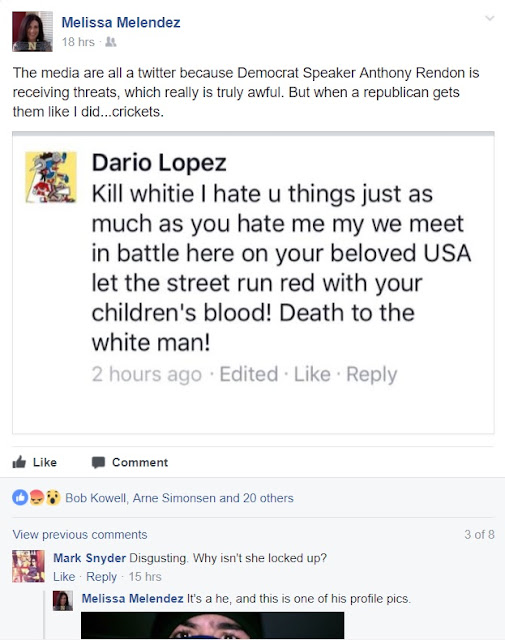 Mr. Rendon, welcome to the Twilight Zone. . .but I doubt it will make him come to his senses, and realize that the game he plays is with violent Marxists who are willing to kill to get their way.

It's funny, they call the GOP, and supporters of Trump, various names like fascists, leninists, and mean, yet it is the liberal left who acts in a manner reminiscent of fascist tyranny.

Now, they are calling for a Summer of Rage, mass rioting by the left scheduled to begin on Sunday, just before Independence Day.

So, while they call the political right "mean," I call their desire to overthrow the government and turn this country into a socialist regime "treason."

-- Political Pistachio Conservative News and Commentary
Posted by Douglas V. Gibbs at 9:05 AM