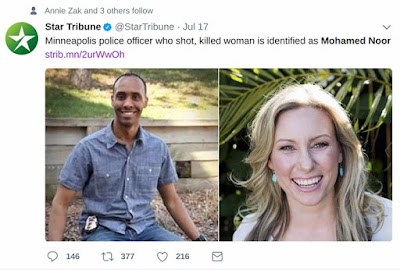 Why is it that every time a Muslim does exactly what conservatives say they will do, because Islam teaches violence and murderous rage against anyone who is not Muslim, the liberal left loonies circle the wagons and then point fingers away from Islam?

In Minneapolis, Minnesota, a Muslim cop (Somali in this case), who took an oath to not act in a barbaric Muslim manner because his job is to uphold the law as a member of law enforcement, to everyone's surprise suddenly went all jihadi on everyone's butts, and shot dead an unarmed woman in cold blood.  The response of Mayor Betsy Hodges?  She then in turn urged Muslims to file hate crime claims, and then on Facebook directed Muslims on how to file hate crimes claims.

In her mind, she is assuming that the poor Muslims will be the victims of hate and prejudice by people who just don't understand their "peaceful" religion as a knee-jerk reaction to this shooting.

She's confused.  She is trying to understand.  How is it that this seemingly non-extremist Muslim member of her police force suddenly went extreme on everyone?  I am sure she believes his violence was the result of something done to him by some mean ol' Trump supporter, somewhere.

A Muslim woman once asked me, "Why is it whenever there is violence you automatically assume that it was a Muslim who committed it?"

"I don't automatically assume it was a Muslim," I said, "but I am never surprised when it turns out to be a Muslim."

"The violence being committed in the name of Islam does not follow the teachings of Islam," she claimed.

"Until the violence stops in the name of Islam, I don't believe you," I said.  "If you want me to stop assuming violence and Islam are not synonymous with each other, clean up your house."

The problem with the liberal left progressive socialist communists is that they either believe the taqiyya people like the woman I was talking to vomits upon us, or they welcome the chaos for their own political purposes (or both).

Liberal nutcakes like Minneapolis Mayor Betsy Hodges automatically assumes that if jihad happens, the Muslims must be protected because then they will all be falsely accused of being capable of terrorism. . . even though the reality is that in that community, a majority applauds and supports the violent actions of their jihadi counterparts.

Hodges sent a message to her poor friends in the Muslim community:

To the Somali community: I want you to know that you are a valued and appreciated part of Minneapolis. I stand with you and support you. The strength and beauty of the Somali and East African communities are a vital part of what makes Minneapolis so strong and beautiful. I am grateful to be your neighbor.  This week a Somali police officer, Officer Mohamed Noor, shot and killed a woman under circumstances we don’t yet comprehend. Justine Damond’s death was tragic and awful for everyone. And I want to be very clear that Officer Noor, a fully trained officer in the Minneapolis Police Department, won’t be treated differently than any other officer. Justine’s death is a tragedy for our city. We cannot compound that tragedy by turning to racism, xenophobia, and Islamophobia. It is unjust and ridiculous to assert that an entire community be held responsible for the actions of one person. That will not be tolerated in Minneapolis. If you are experiencing discrimination, you can file a complaint at http://www.minneapolismn.gov/civil…/discrimination-complaint

If the shooter had somehow turned out to be a Trump supporter, however, the mayor would have no doubt demanded that the entire Trump supporting community, and Trump himself, be held responsible for the actions of one person.

It was Mayor Betsy Hodges herself who instituted the hiring policies in the police department to prioritize the hiring of Somali Muslims.

Meanwhile, more than 22 young men from the Muslim Somali community has traveled overseas to be jihadist warriors as members of al-Shabab in Somalia, and roughly a dozen people have left in recent years to join the jihad in Syria, including the Islamic State group. In November, nine men were sentenced on terror charges for plotting unsuccessfully to join the group and fight in Syria.

Separately, a 20-year-old Somali-American Muslim went on a stabbing rampage at a shopping mall in St. Cloud last September, wounding 10 people before an off-duty police officer fatally shot him.

The blood of Justine Damond, and every other victim of Islamic violence in Minneapolis, is on Mayor Betsy Hodges' hands.

-- Political Pistachio Conservative News and Commentary
Posted by Douglas V. Gibbs at 11:56 AM