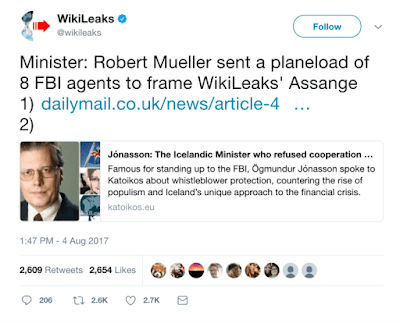 While not conservative, WikiLeaks' Julian Assange hates governmental B.S. and therefore the Democrats tend to be a target of his attacks.

While the Trump administration is fighting leaks, two can play that game, and Assange has placed special investigator Mueller in his sights (especially since Mueller was once brought in to put WikiLeaks into his cross-hairs).

As the Justice Department's Special Counsel of the distraction-looking-for-a-crime Trump-Russia “collusion” conspiracy theory, it turns out Mueller was chosen for a reason.  According to Assange, Mueller is an expert at framing people.  Mueller is the political world's version of an assassin, but his expertise is character assassination for the purpose of meeting a political agenda.

Mueller was the guy hired to make sure Americans were sure, beyond a shadow of a doubt, that Iraq had weapons of mass destruction, and then (while this is not in the article I am sure he was in on this) convincing everyone it was a total lie.  Did Iraq have WMDs?  Was it a ruse?  Did they move them to Syria?  Mueller was so effective that to this day nobody truly knows the truth on the matter.  Figuring out if Iraq had WMDs is about as easy as knowing if there truly was a lost continent of Atlantis.

It's Mueller's job to make nothing into something, and to make sure you fully believe that nothing exists, even if there is no evidence.  Now, the Democrats have hired him to do what he can against President Donald Trump - to take the Russia, Russia, Russia accusation and make it real, despite the fact that there is zero evidence.

WikiLeaks says that is what Mueller does.  He's a facilitator. . . facilitating fiction into fact.

-- Political Pistachio Conservative News and Commentary
Posted by Douglas V. Gibbs at 6:27 AM