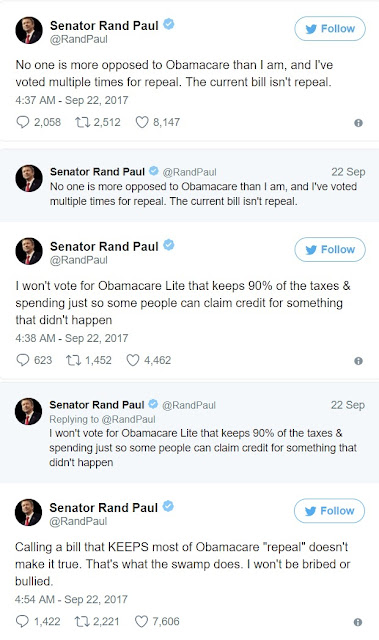 The American People, for the most part, recognizes that either the federal government has no authority over the issue, or that federal influence on our health care industry (and I really should say health insurance industry) is a bad idea.

When the Affordable Care Act was being created and placed in front of the faces of the members of the United States Congress during the presidency of Barack Obama, the Republicans in Washington were arm-in-arm with their opposition to the government intrusion into an industry that is none of their business.  Now, we have this silly notion of "repeal and replace."  Replace?  Why would we wish to replace something that in its basic form is not only an assault upon any system of liberty, but is illegal (as per the U.S. Constitution) to exist in the first place?

The Republican Version of Obamacare keeps dying on the vine in Congress.  It can't seem to get any traction or bear any fruit because it is poison.  It can't seem to get enough votes because there are a few members of the U.S. Senate who view it as poison (and a few who want the deadly level of the poison to be increased).

All of the Trump era attempted maneuverings regarding Obamacare have not been repeal.  Each one of them have been attempts to create a softer form of federal tyranny against our healthcare system.  Some republicans, like Rand Paul, understand the truth of the matter.

Failure of yet another Republican pushed Obamacare replacement is upon us, and the GOP once again can't seem to understand why they can't get anything done when it comes to their opposition to Obamacare.

This week, despite monkeying with it with last-second revisions to perhaps win over the members of the Senate who are not in favor of the latest offering, another Obamacare repeal and replace looks like it is doomed to defeat.

They miss the point.  Revisions won't win over people like Rand Paul.  Only a constitutionally required repeal will get enough votes.

The latest version of the bill was written by moderate Senators Lindsey Graham of South Carolina and Bill Cassidy of Louisiana. They are Democrat-light, except maybe on a handful of issues.  Why would conservative members be willing to go for it?  It's not a departure from Obamacare, just a milder version of it.

What is the difference if we drive off a cliff, or walk off a cliff?  The results are the same, and constitutionally-minded legislators like Rand Paul understands that truth.

Besides, the changes to the latest bill to win support weren't made to make the conservatives happy, but to make the liberal Republicans happy, like Lisa Murkowski of Alaska and Susan Collins of Maine.

With only 52 GOP senators, Senate Majority Leader Mitch McConnell (R-Ky.) can only afford to lose two votes, and so he has decided to try to appeal to the moderates, who may be lost if the bill is not leftist enough.  How about the conservatives?  Even if Murkowski and Collins were roped into supporting the bill, when it comes to conservatives, Rand Paul is joined in his refusal to accept anything other than repeal with Utah Senator Mike Lee and Texas Senator Ted Cruz.

Murkowski opposed even debating previous iterations of repeal in the summer, because she, in truth, is a Democrat in Republican clothing who wants the Obamacare alternative to remain as close to what Obamacare is as possible.

I am thinking the Republican Party, rather than chase the conservative base and reach out to Paul, Lee and Cruz, will try to go as leftist as possible to bring Democrats on board.

What good, then, are they as an opposition party?  Aren't they supposed to be standing against the cultural and political Marxism being represented by the Democrats?

Republicans also lack the votes to reopen debate on the latest bill.

The media will portray it as a defeat, and claim the Republicans are a do-nothing Congress.

The protesters will continue to scream.

Washington needs to understand, the squeaky wheel of opposition to repealing the whole Affordable Care Act is not the majority, and is not in line with the rule of law.  They need to uphold their constitutional oaths, repeal Obamacare, and allow the States to go back to providing their own programs, if they so desire.  That's the reasonable road, and the constitutional road.  Anything else is simply an act that gives in to the road to socialism this country seems to be trying to engage in.  The Republicans, unfortunately, seem to wish to stroll down that road to destruction.  While many say that's better than what the Democrats offer, which is a race down that road at break-neck speed, in the end the result is the same.  Over the cliff, and into the depths of tyranny.

The Democrats, by the way, have their own plan.  It's being led by self-proclaimed socialist Bernie Sanders, and is a call for full-throttle socialized single-payer 100% government-controlled healthcare. . . the same kind socialist countries, communist countries, and fascist countries in history have pursued.