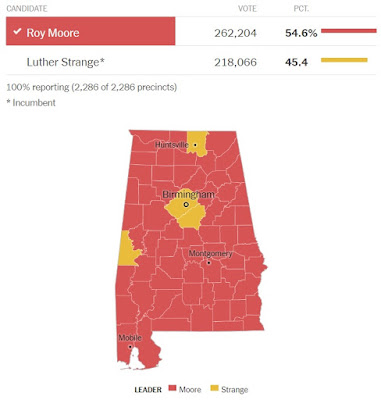 For some strange reason, when Luther Strange called out to the establishment arm of the Republican Party, Trump followed them into Strange's camp. A very strange development for Trump, if you ask me.  Does he not realize how much of an ally Roy Moore can be?

The very conservative, constitutionalist former State Supreme Court Judge Roy Moore, however, despite the infiltrated leftist arm of the Republican Party standing against him, won anyway.  His victory yesterday sets him up for a December 12 showdown against Democrat Doug Jones for the United States Senate seat in the United States Legislature representing a very red Alabama vacated by Attorney General Jeff Sessions.

Judge Roy Moore is known for praying before each session of court when he was a judge, and displaying the Ten Commandments on the wall, practices that were eventually challenged by lawsuits, the latter ending in a momentary victory for Moore, until he also called for a large monument, that he refused to removal after a judge ordered it to be eliminated from the front of the judicial building he was serving as a judge in.

Known to be very conservative on all of the social issues, his opposition to same-sex marriage brought upon him the wrath of the Southern Poverty Law Center in 2015.  Moore issued an order to probate judges to ignore the mandate regarding same-sex marriage, and even challenged the federal government on the State issue of marriage by ignoring Obergefell v. Hodges.

In 2014 while speaking in Mississippi, Moore accurately said that the Framers of the Declaration of Independence and the Founding Fathers attributed our rights to "life, liberty, and the pursuit of happiness" as coming from a specific "Creator" God, stating "Buddha didn’t create us, Mohammed didn’t create us, it was the God of the Holy Scriptures."  When he was accused of implying the First Amendment only protected Christians, he rejected that and stated his belief that the First Amendment protects all faiths: "It applies to the rights God gave us to be free in our modes of thinking, and as far as religious liberty to all people, regardless of what they believe."

In 2016 Moore was again suspended by the state's Court of the Judiciary.  On September 30, 2016 Moore was found guilty of all six charges against him and was suspended for the remainder of his term, which was to end in 2019.

The relentless Roy Moore, despite the attacks against him, has continued his crusade to preserve and protect the United States Constitution, and has now turned his attention towards the United States Senate.  Considering how conservative the State of Alabama is, I am willing to all but guarantee that Moore will be their next U.S. Senator after the December 12 election, further tilting the scale in Congress away from the establishment, and towards a more constitutionally-minded federal system of government.

As for the U.S. Senate, if we really want it to be a constitutional part of the U.S. Government as it was originally intended, we would repeal the 17th Amendment.  The 17th Amendment not only instituted major damage to our system as a republic, moving it closer to becoming a very dangerous pure democracy, but was also an unconstitutional challenge to the final clause of Article V., stripping the States of their equal suffrage (including those who did not give their consent).

-- Political Pistachio Conservative News and Commentary
Posted by Douglas V. Gibbs at 9:58 AM