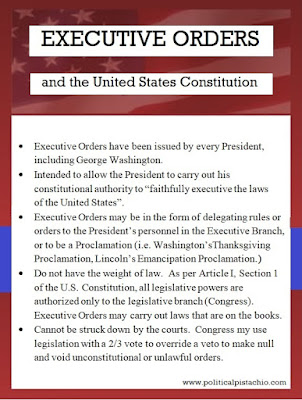 President Donald Trump has released a new executive order regarding restrictions on travel from countries that are considered a threat to the United States.  The latest additions doubles down on Trump's claim that his ban is not just about Islam.  The extreme vetting travel restrictions are all about National Security.

The newest order recognizes that threats exist beyond Islamic terrorism, and that threats against the United States exists in countries that do not necessarily have Muslim majorities.

The latest order regarding the executive's desire to put in place “extreme vetting” builds on his March executive order that required more strict procedures regarding people coming into the United States from the countries listed. And, as expected, the courts went into motion to ban Trump's efforts, using an authority they do not have.  The U.S. Constitution does not give the federal court system the authority to strike down executive orders.  Congress has the authority with legislation to overpower executive orders, but must do so with a two-thirds majority in order to override any veto that would be inevitable.

The new travel ban adds North Korea, Venezuela, and Chad to the list and drops Sudan, for a total of eight affected countries. Remaining under the ban are Iran, Libya, Somalia, Syria, and Yemen.

North Korea and Venezuela do not have significant Muslim populations, but are following communist folly under dictatorial regimes, and the people in those country are starving and dying as a result of the presence of Marxist philosophy in their system.

The new executive order has a shelf-life of 180 days, after which time the Department of Homeland Security, Justice Department, and Office of the Director of National Intelligence are tasked with suggesting adjustments if necessary after examining the benefits and consequences of the previous order.  The prior "travel ban" executive order blocked entry of all persons from the listed countries for 90 days and prevented refugees from entering the U.S. for 120 days.

Due to unconstitutional judicial interference, the March executive order was tossed around and chewed on until finally going into effect in late June.

Included in the latest attempt to secure the safety of the residents of the United States against potential foreign threats are requirements regarding the issuing of electronic passports, the sharing of criminal data between agencies, stiffer rules regarding the reporting of lost and stolen passports, and the sharing of more information on travelers in the hopes of making sure the identities and national security risks of those trying to enter the United States are fully and necessarily properly vetted.

The new U.S. policy also requires foreign governments to cooperate with the U.S. government in the effort of identifying suspected terrorists and share identity-related information.

Trump's opponents are ignorantly calling the latest restrictions an expression of "deep-seated prejudice", "bias", "bigotry", and "discrimination [against] communities of color".

Screams of racism usually accompany arguments that have no basis in law or well-thought out stance that takes into consideration all benefits and consequences regarding the issue.  All of the judicial challenges are not based in law, and are purely political in nature.  From the point of the view of the U.S. Constitution, according to Article I, Section 9 of the United States Constitution, Congress has the authority to make immigration law prohibiting persons from entering the country.  According to laws on the books, the President has the authority to prohibit persons he believes to be a national security risk from entering the country.

For those of you who get caught up in case law and so forth. . .

The Supreme Court in its 1982 case United States v. Valenzuela-Bernal, ruled “The power to regulate immigration—an attribute of sovereignty essential to the preservation of any nation—has been entrusted by the Constitution to the political branches of the Federal Government.” The Court then quoted a 1976 case, which acknowledged, “The Court without exception has sustained Congress’ plenary power to make rules for the admission of aliens.”

It’s possible that Trump could unilaterally impose such a ban as president, though legally that’s more of an uphill climb. Federal law—specifically 8 U.S.C. § 1182(f)—provides: