Like Trump, Travis Allen is Winning Over Voters, and Killing the Blue Wave 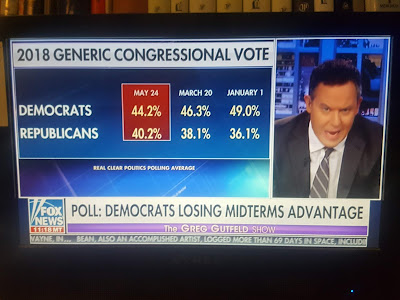 With one week to go in California before our primary (which is a weird one because it's a race for the top two positions, regardless of party . . . the establishment wants us to be more democratic . . . Despite the fact that in Article IV., Section 4 of the Constitution it says each State must be a republic) the Democrats are losing ground.  The thing is, I don't think they realize they are in big trouble.  I keep hearing all of this garbage about a coming blue wave.

Their arrogance may wind up becoming their undoing.

The other day I was watching Fox News, something I get a chance to do on rare occasion, and Greg Gutfield put up a graphic (shown above left) that shows that in generic polls the Democrats are losing ground.

Could it be that the voters are sick of the "we hate Trump" platform of the Democrat Party, and are actually responding to the fact that the economy is improving, peace is expanding, and the Democrats are going off of a leftward ledge towards a straight mixture of Marxism and insanity, during a conservative Trump presidency?

On television, California gubernatorial candidate Antonio Villaraigosa, the former mayor of Los Angeles, is showing us that he even realizes that the hard left craziness of Gavin Newsom (former mayor of San Francisco) is over the top, and so Villaraigosa is running on things like "single payer is too expensive" in order to overcome the deficit in the polls he's been facing behind John Cox.

The gubernatorial candidate who understands that conservatism wins if articulated properly is Travis Allen.  The polls, the same ones that said Hillary was a shoe-in, doesn't give Travis Allen a chance.  Then again, they said the same thing about Donald J. Trump.  In the case of Travis Allen, he's running his California Governor Campaign in a manner very similar as Trump did when he wound up flying up and out from under the radar to surprise everyone.  Grassroots born, and popular with the people, Travis Allen is still in the race, and the establishment is throwing every trick they can at Allen to stop him.  The establishment claims that only a moderate Republican like Cox can give the GOP any chance of securing the governor's mansion in California.

If the Republicans abandon Cox, and put their power behind Travis Allen, it will not only put the Republicans back into the Governor's seat, but put someone in office who is capable of fixing California.

The last time we had a moderate Republican, Arnold Schwarzenegger, it was a disaster.

That all said, could you imagine the shockwave through the country we would witness if California Democrats lost the Governor's race, and seats in both the State Legislature, and congressional seats in Washington?

The Trump counter-revolution against the liberal left's coup against the U.S. Constitution would take yet another step towards restoring the American System of liberty, and knocking out the devastating policies of the Democrats . . . for a while.