Travis Allen Winning Where It Counts . . . in the Grassroots 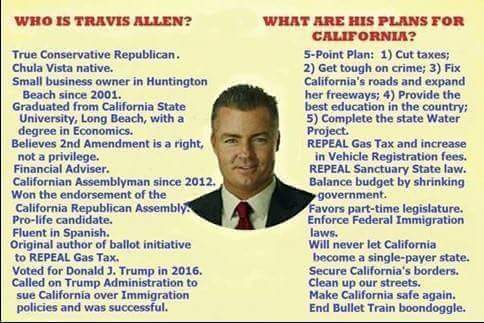 Donald J. Trump surprised everyone when he defeated Hillary Clinton in the race for the White House.  The leftist media and establishment was shocked because all of their numbers pointed towards Mrs. Clinton.  Going into election night in 2016 I was confident that Trump was going to win because of alternative numbers on the internet.

While the mainstream polls were not showing Trump within striking distance, the numbers that were showing him way ahead had nothing to do with manipulated polls.  Trump was decimating Clinton in social media, and in search engine interest.

The numbers for California Gubernatorial Candidate Travis Allen are the same.

The leftists are trying to convince Republicans that if they want to have a chance in the top two California Primary on Tuesday, June 5th, they need to abandon Travis Allen, and cast their vote for the more moderate John Cox.

We did that in the special election in 2003 with Arnold Schwarzenegger, and elected a devastatingly moderate Republican who folded against the unions within the first six months.

Insanity is defined as doing the same thing over and over again, and expecting a different result.

Besides, the numbers we are being offered by the polls, and that Trump believed when he cast his lot behind Cox, are false.  They are designed to manipulate voters. They are designed to fool Republicans into casting their vote for Cox so as to split the GOP vote and allow Antonio Villaraigosa to grab that second spot.  In other words, Republican voters who are prepared to vote for Cox because of what the numbers say are falling for the Democrat Party's tactic of electoral bait and switch.

As conservatives, Travis Allen fits our value system more so than John Cox, who is actually a liberal from Chicago who changed his stripes since 2016 (when he was a never-trumper) in order to run for governor.

Here's the numbers that really count. 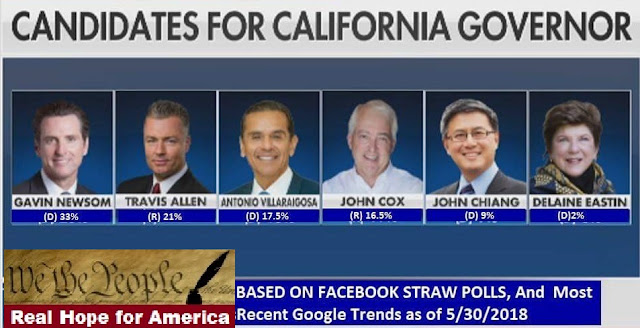 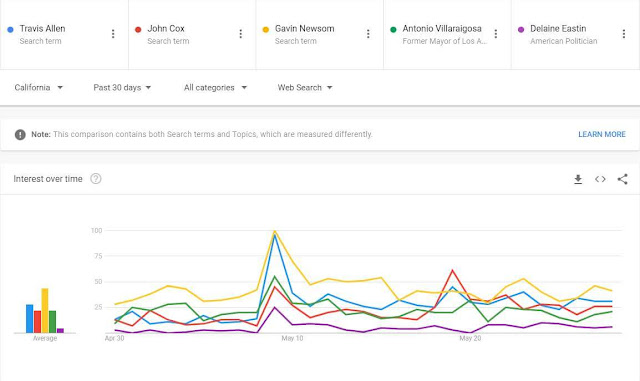 The reality is, Travis Allen is in second place. Travis Allen is scorching John Cox where the numbers really count.  Travis Allen is the Donald J. Trump of this race, but to make sure it happens, we can't fall for the Democrat Party's games and switch our vote to Cox because we believe their lies.

The idea that only a moderate can win in California is a lie.

Conservatism wins when articulated properly, and Travis Allen is doing exactly that.

It's time to stop doing what the Democrats tell us to do with their polls, and misleading media coverage, and vote with our value system, vote our conscience, and vote for the real rock-solid conservative in the race for California Governor - Travis Allen.

-- Political Pistachio Conservative News and Commentary
Posted by Douglas V. Gibbs at 9:29 AM