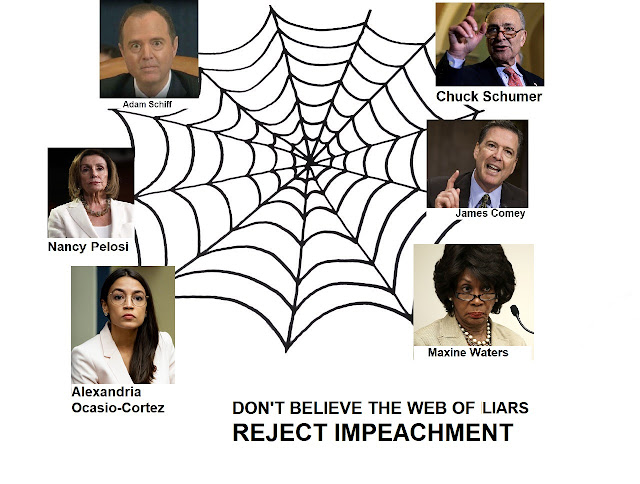 The Democrats have been in impeachment mode since day one of Donald Trump's presidency.  They thought they had moved America into a single party system, setting up Hillary Clinton as the Queen to sit on the first throne of a oligarch run America.  Their corruption runs deep, and the deep state is entrenched in ways that the normal person can't even comprehend.  The establishment's allies had done all they could to prepare for the final half of the sixteen year plan.  Barack Obama had done his job as the set-up man.  Then, out of nowhere, a non-politician named Donald J. Trump, who recognized the establishment for what it is, and vowed to dismantle it, won the presidency.

The liberal left's impeachment push is totally politically motivated.  They aim to undo the vote of America.  They aim to overturn the Constitution, and American Liberty.  And in the process, they have outed themselves.  The Marxism that has been flowing through the veins of the Democrat Party since the Fabians provided the injection of their version of socialism in the 1880s, and the flawed desire to change America into a democracy rather than a constitutional republic that has been present in the party since the 1820s thanks to the founder of the Democrat Party, Andrew Jackson, is now front and center.  They do not fight for America, they fight to fundamentally transform America into a foreign system the Framers of the Constitution wrote our founding documents to avoid.

America was created to be as unlike the rest of the world as possible, to leave behind the authoritarianism of Europe, to divorce the New World from Old World corruption and deep state bureaucracy.  We fought the mightiest empire of the time during our Revolutionary War in order to become our own country, and to pursue our own path, without foreign influence.

The age of liberty was born when the United States of America won her sovereignty.  Anti-Constitution forces launched immediately.  We've been in a war for our country since day one, and just when we thought the authoritarian socialists may have finally yanked our freedom from us, a mighty warrior capable of withstanding their attacks emerged.  He's not a politician.  He's not a party man.  He's not a part of the system.  He can't be bought, or promised power.  He is the only President to ever accept the Office who did not need to do it.  He undertook it because he wanted to.  Because he saw that America needed him.

Now, the web of liars are trying to impeach President Donald J. Trump for no other reason other than that he is a threat to their corruption.  Don't believe the lies.  Support our president.  Write your representative and tell them to reject impeachment.  Reject the lies.  Support American Liberty.