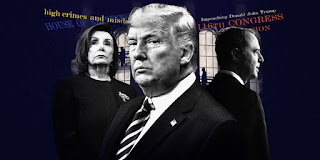 By Douglas V. Gibbs
Author, Speaker, Instructor, Radio Host.
Article I, Section 2 of the U.S. Constitution states that the House of Representatives has the sole power of impeachment.  Impeachment is the ability to indict, or charge.  They can charge, all they want, even if the reasoning is flawed and idiotic.
Article I, Section 3 of the U.S. Constitution states that the United States Senate has the sole power to try all impeachments, and just below that clause it states that judgment in cases of impeachment shall not extend further than to removal from office, and disqualification to hold and enjoy any office or honor, trust, or profit under the United States.
In other words, it is not a criminal trial.  Imprisonment based on sentencing by Congress is not an option.
Removal from office is not possible since President Trump has already vacated the office of the presidency.  Since the word "and" is used when it comes to judgment, that means that the Senate must convict prior to the President vacating office.  Technically, their window ended on January 20, 2021.
The removal from office punishment is reiterated in Article II, Section 4, again nullifying any attempt to convict a President after leaving office.
And, there is yet another clause in the Constitution also being violated by the current impeachment stupidity.
*Article I, Section 9 prohibits the Congress from passing a Bill of Attainder. A Bill of Attainder is when the legislature declares the guilt of a person or group of persons, and punishes them without due process (the benefit of a trial).

In Britain, bills of attainder were used as a convenient way for the King to convict subjects of crimes and confiscate their property without the bother of a trial, and without the need for a conviction or indeed any evidence at all. Such actions were seen as tyrannical because often this power was used against political enemies, and the Founding Fathers did not wish to give the new federal government those same kinds of powers. Some states, prior to the Constitution, did use attainders against British loyalists, but the practice all but disappeared after the Constitution so specifically forbid the use of attainders by the U.S. Congress, and the States.

The true danger of a bill of attainder is that such a legislative act inflicts punishment without a judicial trial, and takes away the life, liberty or property of the target [without due process in violation of the 14th Amendment, as well].
* From my book, The Basic Constitution.
-- Political Pistachio Conservative News and Commentary
Posted by Douglas V. Gibbs at 10:45 PM