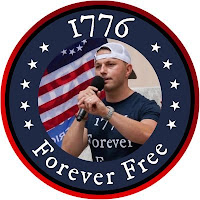 By Douglas V. Gibbs
Author, Speaker, Instructor, Radio Host
In a conversation with Dr. Cordie Williams, a.k.a. The Megaphone Marine (https://1776foreverfree.com/), who was in Washington D.C. for the rally and following protest (as were nearly a dozen friends of mine, who all confirmed his recount of the events to me) I learned that the belief Trump Supporters stormed the Capitol on January 6, 2021 is not only false (of which I already believed since that day), but that the possibility of Trump Supporters who were at the rally to hear President Donald J. Trump speak and then being present at the Capitol in time to participate in the "Capitol Riot" was logistically impossible.  In other words, regardless of whether or not Trump incited violence among his supporters at the rally, it was not possible for them to get to the riot site as claimed in time to carry out such violence based on the timing of what happened as reported by the mainstream media.  Those present at the Capitol Siege, in other words, were not at the Trump Rally to hear the President speak.  They couldn't have been.  There was not enough time for them to get to the Capitol in time for the alleged riot.
Why should we be surprised?  The liberal left progressive Democrat socialist commies operate in the realm of deception. They lie. They cheat.  They possess the same attributes of dishonesty as the tyrants of darkness throughout history.
According to a large number of reports, the claim of violence against the Capitol by Trump Supporters is a scam, a lie, and the dishonest basis of the last-minute attempt to impeach and remove Trump from office mere days before he is scheduled to depart from the White House.

→ Screenshots from a Discord chat channel allegedly hosted by John Sullivan – a far-left, anti-Trump activist who appears to have incited violence at the U.S. Capitol while posing as a journalist – reveal he and his followers infiltrated the January 6th Save America March in Washington, D.C. ... https://thenationalpulse.com/news/chat-logs-rally-plot-trump/
→ ANTIFA Activist Daniel Alan Baker Arrested For Plotting To MURDER Trump Supporters...Says He ‘Received Soros Money’ In Youtube Video ... https://100percentfedup.com/antifa-activist-daniel-alan-baker-arrested-for-plotting-to-murder-trump-supporters-says-he-received-soros-money-in-youtube-video/
→ James, brother of accused leftist provocateur John Sullivan, claims 226 Antifa members started Capitol riots -- As Rudy Giuliani noted on Twitter, why wasn't this brought up during the sham impeachment hearings? ... https://noqreport.com/2021/01/15/james-brother-of-accused-leftist-provocateur-john-sullivan-claims-226-antifa-members-started-capitol-riots/
→ BLM instigator of Capitol riots, John Earle Sullivan, arrested: The Utah Black Lives Matter "activist" has been bragging about his involvement in instigating the Capitol riots. Now, he's been arrested. ... https://noqreport.com/2021/01/14/blm-instigator-of-capitol-riots-john-earle-sullivan-arrested/
→ Feds admit Capitol “siege” was planned in advance by Trump haters, not Trump supporters ... https://www.naturalnews.com/2021-01-15-feds-admit-capitol-siege-planned-trump-haters.html
→ ‘We Did It!’: CNN’s Jade Sacker caught celebrating with BLM instigator John Sullivan during Capitol riots ... https://noqreport.com/2021/01/15/we-did-it-cnns-jade-sacker-caught-celebrating-with-blm-instigator-john-sullivan-during-capitol-riots/
→ Investigators believe riot at Capitol was planned and not inspired by President Donald Trump. But Democrats impeached before they had any information from investigators. ... https://trendingpolitics.com/breaking-investigators-release-huge-bombshell-that-could-change-the-entire-narrative-about-january-6th/?utm_source=economics
→ The Capitol Hill Riot Was Pelosi’s Fault, Not Trump’s ... https://www.frontpagemag.com/fpm/2021/01/capitol-hill-riot-was-pelosis-fault-not-trumps-daniel-greenfield/
→ The media has manipulated public opinion to demonize protesters as a violent threat when in actuality they were the ones getting brutalized and even killed for exercising their 1st Amendment rights ... https://bigleaguepolitics.com/new-footage-shows-pro-trump-demonstrators-being-let-into-capitol-orderly-protesting-dubious-electoral-certification/
→ Did You Notice the Jan 6 Crowd Cheered When Trump Touted Harsher Penalties for Monument-Trashers? ... https://pjmedia.com/news-and-politics/victoria-taft/2021/01/12/did-you-notice-the-jan-6-crowd-cheered-when-trump-touted-harsher-penalties-for-monument-trashers-n1334441
→ Antifa 'Provoked' Ashli Babbitt Shooting at Capitol, Expert Analysis Concludes: Misako Ganaha reveals far-left 'agitators' triggered fatal shooting ... https://neonnettle.com/news/13848-antifa-provoked-ashli-babbitt-shooting-at-capitol-expert-analysis-concludes
We know the left lies.  We know they are corrupt.  So why do we believe anything they ever say?
I am especially disappointed in the "conservative never-Trumpers", one of whom wrote on my Twitter page, "If you supported this challenge, you are dead to me. Never speak to me again. Get off my site and never come back." ... Once, you were my friend. Once, you (perhaps) were a constitutional originalist. Now, you are the Constitution's enemy - and my own. ... The nauseating scene in Washington, D.C., is Trump’s fault."  How is it that a conservative, blinded by their hatred for Trump, can become so blind?  So filled with hate?  So off the reservation?
I can only pray for the blind and fooled, just as I pray we defeat the liars behind the great Capitol Riot / Siege lie, who are the same people who were behind the steal of the election, the scamdemic, and the violence over the Summer of 2020 (of which the fake news media called "peaceful protests").
-- Political Pistachio Conservative News and Commentary
Posted by Douglas V. Gibbs at 7:37 PM

" There was not enough time for them to get to the Capitol in time for the alleged riot."

Are you kidding or just an insane person?

Trump finished his speech at about 1:10PM and the riot started on Capitol at about 2:15PM

The riot did not begin at 2:15, that is when the Capitol was breached. The initial storming of barricades occurred at 1:00 pm, ten minutes before you state Trump ended his speech, and the police were overtaken on the steps of the Capitol at 1:30, twenty minutes after you claim the speech was over, and according to Navigator it takes the average person 36 minutes to make the walk. Again, the timing of the riot was that it began before any attendees of Trump's speech could have arrived or participated. This makes it impossible for Trump to have "incited" the violence that occurred.