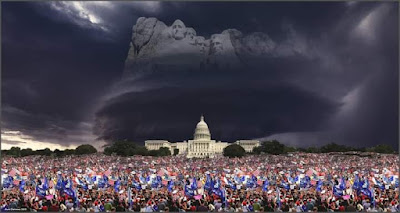 Americans have been pushed and pushed and pushed.  They feel like their voices have not been heard.  They were told Trump won a stolen election in 2016, and then in 2020 the liberal left proceeded to steal it themselves using obvious tactics, and then arrogantly lying to us in our faces about it.  Meanwhile, the establishment, the crooks, and the spineless weasels of the Republican Party have laid down and let it happen.  The courts have refused to view the evidence on technicalities.

So, hundreds of thousands, if not more than a million, protesters showed up in Washington D.C.

Reports of violence have been exaggerated, and it is likely the instigators were infiltrators.  Violence is not a usual trait of Trump supporters.

The next four years is going to be interesting, to say the least ... regardless of who takes the seat in the White House.  One thing is for sure, the Republican Party is done.  It will die.  And a new party of conservatives with a backbone is fighting to rise from the ashes.  This is just the beginning.

This is not "liberty," it's seditious, armed insurrection.

"Mr. Constitution," my ass. What a fraud you've become.

So, you believe the liberal media that the instigators were all Trump supporters, and you consider demanding the truth rather than accepting fraud "seditious"? Interesting.

What a leftist tool, JASmius, you have become.