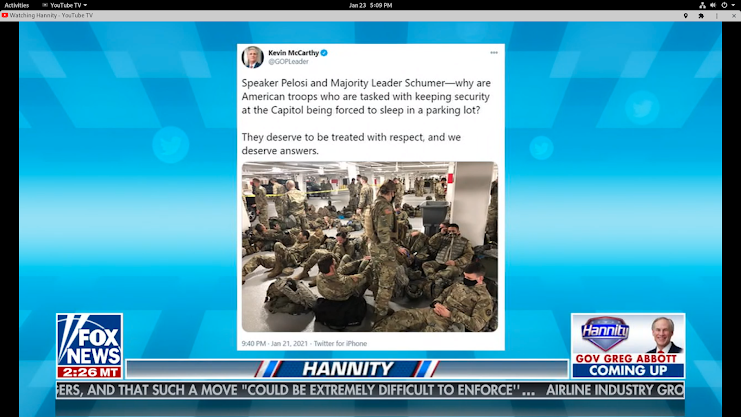 By Douglas V. Gibbs
Author, Speaker, Instructor, Radio Host
In preparation of convincing Americans of the next hobgoblin emergency, domestic terrorism, the Democrats called thousands of National Guard troops into Washington D.C. to occupy the nation's capital in order to protect the new President of the United States, who allegedly is the most popular president in the history of the country based on the alleged number of popular votes he received, to protect Joe Biden and his fellow Democrats from domestic terrorists (a.k.a. Trump Supporters) because after nearly a year of leftwing rioting by Black Lives Matter and Antifa, and leftwing initiated violence at the Capitol on January 6, 2021 that they then twisted to blame Trump Supporters (who have been basically peaceful for four years, and the victims of endless violent attacks), they are frightened because of the possibility of violence by rightwing domestic terrorists who are ticked off that Biden stole, I mean won, the election.
But, since they hate law enforcement, and the military, the Democrats treated them like animals, leaving the troops to sleep on the cold concrete floor during one of the coldest months of winter.
-- Political Pistachio Conservative News and Commentary
Posted by Douglas V. Gibbs at 5:23 PM