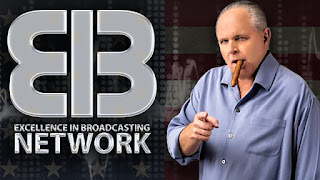 By Douglas V. Gibbs
Author, Speaker, Instructor, Radio Host
Rush Limbaugh began broadcasting on the bigger stage countrywide in July 1988, only two months after I had gotten out of the United States Navy.  I don't remember exactly when I noticed his program, but I believe it was in 1989 when he first appeared on KFI in Los Angeles.  As a young conservative who had already spent years with my nose in the books regarding the United States Constitution, Limbaugh's voice was an oasis in a desert of leftwing news outlets.
Once Limbaugh had established himself as a powerhouse in talk radio, more conservative programming began to emerge.  Radio went from playing cheesy music to cheeky political talk, eventually sending any of the last remaining music stations to FM.  Sports talk, news talk, and any other kind of talk began to emerge, as well.  All of it because of the Limbaugh revolution.  In short, Rush Limbaugh not only launched the conservative talk radio revolution, but he changed AM radio across the board.
I listened to him when I could, usually only grabbing bits and pieces here and there due to my work schedule coinciding with his air-time.  But, when I did get a chance to listen to Rush, it was magical.  Pure genius.  And while he didn't necessarily shape my politics (since we were already in full agreement), he definitely helped me understand why I believe the way I do.
In 2008, when the economy played hide and seek thanks to years of leftist tampering in the mortgage lending market, as a construction worker mine was among the first industries to start letting a bunch of people go.  I moved from operating heavy equipment to driving a transfer (Sand and Gravel Big Rig).  The bad news was my income had dropped drastically, and I had to change my career to something I was not a big fan of.  The good news was I could listen to Rush's radio program in its entirety every day because I was driving a truck all day.
The change in jobs happened at the same time I began teaching Constitution Classes.  Rush kept me on my feet, kept me thinking deeply about our founding document, eventually influencing me to the point that my Constitution Classes matured and became a valuable commodity to the locals who attended the class.  Since then the number of classes has expanded, and in 2011 I joined Rush as a radio talk show host.  I will be celebrating ten years on AM radio this coming August 6, enjoying a Saturday slot with co-hosts, currently on KMET 1490-AM.
I am in the process of expanding my media presence as well.  I am in discussions with Patriots' Soapbox for a slot, and my online video presence is growing.  And, in many ways, Rush was the catalyst.  He was the push behind me that made me believe that I could do it, too.
Now, Rush Limbaugh has passed away, passing Wednesday Morning after a more than a year-long bout with lung cancer.  It's like a part of me has been cut away.  I feel guilty that I have not been tuning him in as much as I could have, lately.  Now, I won't be able to at all, anymore.
Rush will be missed.  He was a voice of reason in a wilderness of leftist insanity.  As the Democrats try to steal their push for a one party oligarchy, one of the primary warriors standing against them has fallen.  America will miss Rush Limbaugh greatly.  Without him the fight just got a whole lot more difficult.  But, I refuse to give up.  "Keep the Faith," he said.  His talent may have been on loan from God, but the liberty we have from God in this country was more than a loan.  It was a gift, just as was Rush Limbaugh.
Goodbye, good sir, may the seas in Heaven be navigated by you with pure joy.
-- Political Pistachio Conservative News and Commentary
Posted by Douglas V. Gibbs at 9:16 AM

We have lost a great American and Patriot. but more than that, we've lost someone who one could consider the conscience of our country. He believed in what made this country great and in turn pointed out the idiocy and worse of these people who not only spout hatred and more towards our country but in fact hate it and the fundementals it was founded on. And one point to all the haters out ther, especially to those who never bothered to even listen to him or his show.

Rush always made the point of telling his listeners "don't just listen to me and take my word as gospel! Check out the facts, educate yourself as to the realities of the situation and not just on what I say"

I heard him say that many times (believe it or nit, Glen Beck always did that also). So how bad can someone really be who opines then turns and tells all to study it their selves then make what is hopefully a learned decision.

May he rest in peace and let me say Thank You Rush!