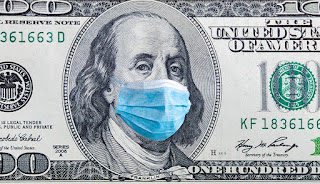 As Red States (Republican-leaning) open up and the citizens shed their masked sign of oppression from their faces, the Blue States (Liberal-Democrat-Marxist-Communist-leaning) are doubling down on their Pandemic protocol madness.  In Southern California, stores that used to not mind me walking in without a facial armband on my face are now kicking me out, despite my cries that I have a medical exemption (face coverings more-often-than-not cause me to go into dizzy spells or long episodes of vertigo).  Aldi personnel actually escorted me out of the store, and refused to check-out my wife's full grocery cart despite the fact that, unlike me, she was wearing a face mask.  Signs along the side of the road are popping up all over California about adding some COVID Alert app on our phones (so they can keep track of our associations with other people ... you know, in case they are COVID positive).  What is alarming about all of this is that I live in what is considered a relatively conservative area in Southern California.  In places like Los Angeles County the mandates have gotten even stricter, and co-mingling with other people is being heavily discouraged.

We can't have those domestic terrorists getting together and planning another not-so-peaceful romp through the Capital again, you know.

This week my wife, and I, and three of our seven grandchildren, traveled north up through California to the Oregon Coast.  Our thirty-something son is holding down the fort at home.  Along the way, especially around the Interstate-580 approach to the 101 Freeway just north of San Francisco, we saw how bad it really is in California.  Despite making this trip half a dozen times per year (we plan to move permanently out of California in the near future to our cabin in the woods on the southern Oregon Coast; California's gotta be pretty bad if Oregon is a better alternative) it still does not cease to amaze me about how bad the liberal parts of California truly are.  In the Bay Area the number of people driving their cars with masks on, jogging with masks on, walking their dogs with masks on, and pumping gas far from anyone else with their masks on, was incredibly high in the San Francisco Bay Zone.  The signs for the CA COVID app were greater in frequency, and along the roadway as we passed through Berkeley and Oakland the homeless infestation was mind-boggling.  Entire encampments of homeless tents and cardboard structures lined the sidewalks, filled the parks, and breached the freeway underpass zones.

And, yes, the smell was pretty horrid, too.

The last time I was in Oregon was four times last summer; June, July, August and October.  Each of those times in the small coastal town our property lies near I never wore a facial condom, and not a word was uttered to me, except on the last trip at a Bi-Mart (where they actually kicked me out ... and I was shocked, because the same store on previous occasions had given me no hassle).  On this trip, however, deep into the Winter/Spring intersection of 2021, and during a time most believe is beyond the tail-end of the COVID-19 emergency, everybody in town are wearing masks, and even the Grocery Outlet shooed me off like I was some kind of irritating insect.  I literally can do nothing in town.  My wife has had to go to the store without me.  If I were alone, I would starve (not that a week-long fast wouldn't do me any good).

What is happening?  Florida is wide open from what I hear.  My friend in a small town in Tennessee said they are laughing at us out here for still wearing the worthless masks on our arrogant, virtue-signaling California faces.  While the Golden State's Governor, Gavin Newsom, has been backing off on the indoor dining mandates as a recall effort slams his administration against the wall, the oppressive masking of Americans has not only increased, but on the West Coast the dummies are happily doing it to themselves.

I even saw a dude on a boat in the Chetco River by himself ... with a mask on.  Was he worried he might infect the fish?

How about following common sense?

Masks are about as effective of stopping a virus as a chain-link fence is when it comes to blocking mosquitoes.  Once the cloth gets moist, the air we exhale shoots out the sides, anyway.  States with more lenient lockdown rules, and lax mask requirements have the lowest infection rates, but in the liberal-left States where the edicts are tightest, we are not only seeing higher infection rates, but higher rates in other issues (suicide, domestic violence, pneumonia, face rashes) related to the pandemic protocols and tyrannical facial diaper wearing.

Could it be that the masks are making us sicker?

Could it be that killing our ability to be social animals make us unhappy, and even violent or suicidal?

Could it be that destroying economies over an illness with a better than 99% survival rate may have us on edge, unhappy, and through that stress it may be turning us into a bunch of folks descending into the pit of things like depression?

Could it be that the science is wrong, and the alleged cures are worse than the illness?

"Don't worry," I was told recently at the Veteran's Administration Hospital.  "We'll let you in to your physical therapy appointment without a mask if you're just willing to get the vaccination."