Constitution Question: Why is Citizen Capitalized early in the Constitution, and Lowercase in the 14th Amendment? 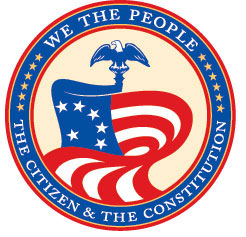 This question came to me by way of email.  Here is my answer:

The question is based on the notion that the Founders, in Articles 1-7 of the U.S. Constitution, capitalized words often for the purpose of emphasis.  They did not italicize back then.

Very observant.  While I don't have an evidence inspired answer because there are no writings I could find as to why the Congress in the Reconstruction Period failed to capitalize the word citizen, my gut feeling says to me that the Framers of the Constitution saw Citizen as being a very important part of the system.  It has been suggested that Thomas Jefferson once said that the highest political office is that of Citizen.  While that quote does not appear in any of his papers, it sounds like something a person of that era would consider saying.  The War Between the States was a turning point in American History.  It was about that time the attitude shifted from the Unites States "are" to the United States "is".  We went from being a voluntary union of a federation of States to a firm union with a national government.  In other words, the union of States and the individuality of its Citizens and members of The Union (the States) changed to a more collectivistic image where the States were more like provinces with an allegiance to the "national" government, and the people became more like subjects than that of Citizens to whom the government served as was believed prior to the war.

Once this article went out, I received an email disputing my claim.  Below is their message, and my response:

Why is Citizen Capitalized early in the Constitution, and Lowercase in the 14th Amendment?

Probably because writing conventions had changed in the meantime.  When the original Constitution was written, it used to be somewhat conventional (but often carelessly practiced - hence the inconsistencies) to capitalize all nouns.  The writing of the 14th Amendment, however, conforms with modern conventions, which call for the capitalization only of proper nouns.

Throughout most of the eighteenth-century, it was common for drafters to begin every noun with a capital letter, just as Germans do today.  This convention was fading by the time the Constitution was drafted (1787), but Gouverneur Morris, who actually penned the final document, elected to follow it.  That is why nouns in the original Constitution are capitalized.

Two years later, when (under the guidance of James Madison) the First Congress drafted the Bill of Rights, it elected to drop the capitalization rule.  Nevertheless, a few mistakes crept in:  Several of the nouns in the Bill of Rights were capitalized.

The capitalization or non-capitalization of a word has no substantive effect, although when used to introduce a phrase it can serve as a clue  to meaning.

While I appreciate the Tenth Amendment Center, and I have heard the "they capitalized because they were nouns" argument, I have always believed that to be a part of a deconstruction argument.  While in Germany capitalizing all nouns is a thing, and sometimes certain habits do bleed into other cultures and societies, there are some instances in which personages from the founding era leaked in their writings that capitalization was also a mechanism for placing emphasis on particular words.  The reason some of the nouns were not capitalized in the Constitution (or were in the Bill of Rights) was not because they whoopsied, and missed it or messed up, but because the emphasis was not (or was) warranted.

-- Political Pistachio Conservative News and Commentary
Posted by Douglas V. Gibbs at 9:35 AM