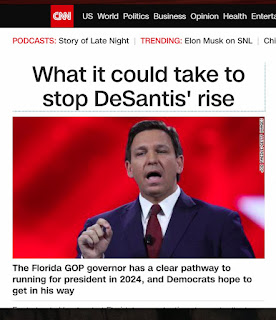 By Douglas V. Gibbs
Author, Speaker, Instructor, Radio HostFlorida Governor Ron DeSantis has created a level of fear in the liberal left Democrats, even more so than has South Dakota's governor Kristi Noem.  Some believe that DeSantis, if Donald J. Trump should decide not to run, is the frontrunner for the Republican nomination for president in 2024.  One reason for the Florida governor's rapid rise is how, under his leadership, Florida has been emerging from the coronavirus pandemic leading the way in avoiding the leftist lockdown and face-covering policies, while also remaining largely low on the scale of the percentage of those allegedly infected with the COVID coronavirus.
The Democrats, while arrogant over their 2020 steal of the Presidential Election, and current runaway violations of the Constitution and the rule of law, are actually nervous about DeSantis.  In this age of them reversing the four years Trump was in the White House, how is it that a Florida Republican governor can gain this much attention and recognition by the public around the entire country?
The plan by the Democrats is to stop him before 2024's possible presidential bid.  In other words, if they can stop him in the 2022 gubernatorial election in Florida it may serve as a means of cutting short the governor's surge.

"It is always easier to stop someone's rise sooner rather than later," said David Turner, spokesman for the Democratic Governors Association. "You don't lose your race for governor and then run for president."

In addition to his successful battle with COVID and the anti-Liberty lockdown and masking policies of the Democrats and establishment Republicans, Florida's economy is booming, and DeSantis also made moves against Congress' HR-1 with his own voting bill aiming Florida's law at protecting elections against the onslaught of Democrat Party fraud.  Lawsuits were swiftly filed once the law arose.
"Me signing this bill says: Florida, your vote counts, your vote is going to be cast with integrity and transparency and this is a great place for democracy," DeSantis said on Fox after the signing.

Florida is also the State of residence of the recently deceased Rush Limbaugh and former President Donald J. Trump, as well as a State that has not had a Democratic governor this century.
Former Republican Governor Charlie Crist, who left the GOP more than a decade ago and represents the St. Petersburg area as a Democrat in Congress, announced he plans to be one of the candidates against DeSantis in 2022.  A number of Democrats have been considering a run, but the bigger names have yet to officially announce they will be running.
The possibility for a party-damaging primary has some Florida Democrats worried.  "We need to get the primary situation figured out," said a Florida Democratic operative with ties to the gubernatorial race. "Our stupid primaries are so late in the year, you essentially have two and a half months... so people start making up their mind before you even have a chance to introduce yourself."
DeSantis' rise, unfortunately for the Democrats, perfectly coincided with the rise of Trump in the Republican Party, and with Donald Trump's decision to move from his former home state of New York to a much warmer Palm Beach.  "The heart and soul of the Republican party is certainly in Florida right now," or so says Chris Hartline, a longtime Florida operative and spokesman for the National Republican Senatorial Committee.
When former President Barack Obama won the state in 2008 by nearly 3 percentage points, the arrogance of the Democrats rose, with them believing that the demographic make-up of Florida had shifted in their favor for good.  They won again in 2012 when Obama narrowly beat Republican Mitt Romney by less than 1 percentage point.
In 2016, Trump beat Democrat Hillary Clinton by just over 1 percentage point. He then bested Biden four years later, despite all of the election fraud in play.

Recently, the Republican hold of Florida is believed to have deepened, with the rise of DeSantis, and the fact that in recent months Trump has lauded the governor and said he "would be considered" as a possible running mate if the former president ran again in 2024.

"I endorsed Ron and after I endorsed him he took off like a rocket ship. He's done a great job as governor," Trump said on Fox Business, going on to describe the governor as a "friend."