Tyranny of the Majority, and the journey to create a Bill of Rights 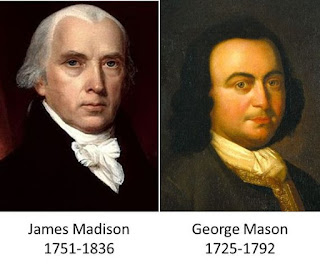 In August of 1786 at the Annapolis Convention, it was decided a convention would be scheduled for May of 1787 in Philadelphia for the purpose of “fixing” the Articles of Confederation.  The Articles were determined to provide too weak of a government in light of Shays’ Rebellion.  As the date approached, during the early months of 1787 Virginia Congressman James Madison, in preparation for the convention, wrote an essay entitled “Vices of the Political System,” detailing the flaws of the Articles of Confederation, and how as a result of those flaws tyrannical majorities were passing unjust laws violating the rights of numerical minorities.  He recognized two realities.  Too much democracy was proving to be harmful to the liberty of some people, and that tyranny was rising out of the population centers.  As a result, the oppression of religious dissenters in Virginia became such a problem that, with Thomas Jefferson, Madison became a leading advocate for the Virginia Statute for Religious Freedom.  Recognizing that, while a strong central government was a dangerous prospect, injustice was occurring in all of the states and something had to be done to insure domestic tranquility and put in place a proper distribution of powers so that the country could once again operate under the Laws of Nature and of Nature’s God (the rule of law). Madison drafted the Virginia Plan, which greatly strengthened the power of a potential central government and laid the groundwork for the debates at the Constitutional Convention.

During the Constitutional Convention Madison advocated for principles of liberty that included a separation of powers, various checks and balances through a proper distribution of power, a bicameral congress with dissimilar legislative houses, and federalism with the intent to ensure localism flourished by limiting the new general government’s authorities to external issues, or issues specifically regarding the union itself, which in turn would not only limit the power of government, but serve as a mechanism that would secure individual natural rights.

When Madison entered the convention he believed the government should not only be a national government, but that the national legislature should be able to veto state laws with the intention of preventing majority tyranny in the states.

As the convention proceeded, Madison not only took extensive notes regarding the proceedings, but he was also corresponding with Thomas Jefferson, who was in France during the convention.  By the end of the convention Madison had changed from being a nationalist like Alexander Hamilton to someone in support of the enumeration doctrine and a limited form of government like Thomas Jefferson lobbied for.

On September 12, 1787, near the end of the Constitutional Convention, fellow Virginia delegate George Mason proposed a bill of rights fashioned largely after the English Declaration of Rights agreed upon in 1689 in England.  Roger Sherman of Connecticut reassured the convention that the states had their own bills of rights, so there was no need for a national bill of rights.  James Madison agreed, arguing that a bill of rights would muddy the water since the purpose of the Constitution was to delegate authority, not list what the federal government could not do.  The convention unanimously rejected Mason’s idea, and a bill of rights was not included in the first seven articles of the new constitution.

George Mason, and his fellow Anti-Federalists, lobbied for a bill of rights, advising the various states that they should not ratify the new constitution until they were assured that there would be a bill of rights added to the document.  James Madison continued to stand against the idea, and one of his colleagues from the convention, Pennsylvanian James Wilson, argued that a bill of rights was unnecessary because the new national government had limited, expressly enumerated powers and had no power to violate the natural rights of the people in the first place.

In Federalist Paper #84, Alexander Hamilton even suggested that a bill of rights could be dangerous, because defining certain rights vaguely would leave them subject to misinterpretation or violation, especially when in the first seven articles no power over any of our rights existed.  With natural rights being numerous and indefinite in number, writing a bill of rights may also leave out important rights.

During the ratification debates a number of delegates promised to pass a bill of rights after the Constitution had been ratified.

Madison was still engaged in corresponding with his friend Thomas Jefferson, who was still in Paris at the time. Jefferson disagreed with the absence of a bill of rights in the Constitution and asserted, “A bill of rights is what the people are entitled to against every government on earth.”  While Madison was still not fully convinced that a bill of rights was a good thing, he began to change his position slightly, finding himself recognizing that government, historically, has been the chief enemy of liberty.  Nonetheless, he also viewed such documents as being mere “parchment barriers” that overbearing majorities and despotic governments violate in the long run, anyway.  In Federalist Paper #10 Madison explained that he believed that a large republic would have many contending factions that would prevent a majority from violating the rights of numerical minorities.

Meanwhile, the Anti-Federalists were calling for structural changes to the constitution, and they were even calling for a second constitutional convention to limit the powers of the general government even more, including denying it any power over taxation and the regulation of commerce between the States.

Madison wrote President George Washington’s Inaugural Address, and in that speech he also indicated support for a bill of rights to be acted upon in the First Congress.

On June 8, 1789, dressed in his customary black threads, Madison addressed the floor of the House of Representatives delivering a speech staunchly in favor of a bill of rights.  He argued that a bill of rights was necessary in order to achieve a harmonious political order and to insure the ideals of justice.  A bill of rights would also extinguish the apprehensions of the Anti-Federalists and convince them to be more accepting of the “principles of amity and moderation” held by those who supported the federalism offered by the new constitution.

George Mason, who had been a driving force behind creating a bill of rights, was the author of the 1776 Virginia Declaration of Rights, the first document after the new country gained its independence to call itself a bill of rights.  Mason, who was not fond of the political game, turned down appointments to the Continental Congress and the U.S. Senate.  He did, however, leave home to serve reluctantly in the Virginia House of Delegates from 1775 to 1780, and in 1787, when he had been persuaded to leave his native state to attend the Constitutional Convention in Philadelphia.  During the convention he was one of the five most frequent speakers, arguing passionately for individual liberty and against a centralized governmental authority that he feared was being created during that convention.

Mason discussed with Madison the fact that over a hundred proposals for amendments to the Constitution had been received in the name of the creation of a Bill of Rights.  The two men, who had at one time been the duo that most opposed each other regarding a bill of rights, conversed often as Madison whittled the bill of rights down to a reasonable number of proposed amendments.

Madison’s House committee, with indirect input by Mason personally, and from his 1776 Virginia Declaration of Rights, had reconciled all of the amendments proposed by the state ratifying conventions and discarded any that would alter the structure of the Constitution or the new government. The list was limited only to those that would secure essential liberties.  Originally, the list was one of nineteen amendments and a preamble.

On August 24, after the House had disapproved two of the proposed amendments, they sent seventeen amendments to the Senate.  The Senate only approved twelve amendments, removing any that placed limitations on state governments.  President Washington, while having no legal role in their adoption, endorsed the amendments as they went out to the States.  During the next two years, eleven states ratified the Bill of Rights to meet the three-fourths constitutional threshold, including North Carolina and Rhode Island.  Virginia became the last state to ratify on December 15, 1791.

To Madison’s satisfaction, the creation and ratification of The Bill of Rights appeased the Anti-Federalist opponents to the Constitution.  In Barron v. Baltimore (1833), Chief Justice John Marshall affirmed the original intent that the Bill of Rights did not apply to the states.  However, after the War Between the States interpretation of the Fourteenth Amendment through various Supreme Court cases led to a concept known as “The Incorporation of the Bill of Rights to the States.”  By the twentieth century the “incorporation” of the Bill of Rights to the States became accepted law, and the doctrine has not been challenged in modern courts.  The Incorporation Doctrine’s application has since strengthened the concept of Federal Supremacy, regardless of actual authorities, and as Madison originally believed, modern interpretation of the Bill of Rights has muddied the waters of political discourse, changing the arguments politicians use regarding the presence, or lack of the presence, of authorities to a simple question: “Where in the Constitution does it say we can’t do that?”

In recent decades, all of the natural rights enumerated in the Bill of Rights have been under attack by federal power-grabbers, leaving patriots fearful that despite the presence of a Bill of Rights, their access to their natural rights may be in serious danger ... as James Madison had originally feared.