The 2nd Amendment: Defending Liberty in the Modern Age 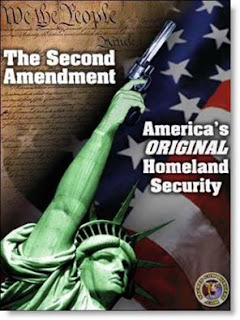 It took a militia of regular folks who were willing to take arms to defeat tyranny to orchestrate and successfully administer the American Revolution in the Eighteenth Century.  Since then, technology has changed the game and politicians have been doing whatever they can to disarm the public.  When confronted with the reality that his anti-gun policies violate the Second Amendment, Joe Biden has used the same argument the liberal progressive left has used for ages; the right to keep and bear arms relates only to muskets.  When confronted about his presidential executive activities aimed at increasing restrictions on guns, and his push to ban certain kinds of firearms, Biden said of the Second Amendment, “From the day it passed, it limited the type of people that could own a gun and what type of gun you could own.  You couldn’t own a cannon…If you think you need to have weapons to take on the government, you need F-15s and maybe some nuclear weapons.”

That was Biden’s way of saying, “defense against tyranny no longer applies to the Second Amendment, because you don’t have the ability to take us on.”

In a discussion last night an individual told me something similar.  After his comment that guns kill people, of which I responded, “No, bad people kill people.  Take away their guns they find another way to kill, especially since they now know their victims are not armed.”  He then went on to say that the militia argument is obsolete because if the government wants to take you out, no gun is going to save you against a drone strike.

When the United States Constitution was framed there were no federal gun laws (all of which are unconstitutional, in the first place), and none of the States had any restrictions regarding owning guns.  Some towns had regulations prohibiting open carry or concealed carry in their town, or in certain establishments, but for the most part any semblance of restrictions on arms was at a minimum; and that included cannons.  Not only could the average person own a cannon, a handful did.

Originally, understanding that tyranny rises when the public is unarmed, the Founding Fathers wanted to make sure that the public was armed, and in such a way that the number of people in the general population who were armed outnumbered the number of people that may be used in a standing army against the citizens.  This would, as believed by the founding generation, hold back tyranny and ensure the security of our natural rights and individual liberties.

One wasn’t worried about mass shootings since, first of all we had a virtuous society so the number of people mentally capable of such atrocities was near nil, and second firearms by a single person on a shooting spree wouldn’t do so well anyway since once fired that firearm still had to be reloaded and since that was such a cumbersome activity he could be overwhelmed easily during the process.  If someone was a mass-killing type, a knife was a much more reasonable way to go about it.

That all said, today’s political games regarding gun ownership is definitely not consistent with the whole reasoning behind the creation of the Second Amendment, which was more than self-defense or personal use.  The purpose of the Second Amendment was to ensure the people could defend themselves against a rising tyranny at the government level.  Regardless of the “guns kill” argument, the primary reason for enabling people to be armed is to stave off tyrants in government.  Therefore, if that is the case, the firepower of the public should be equal to, or greater than, that of the government.

However, as Biden stated, and the individual I was conversing with yesterday said, today’s guns are no match against what the government can throw against us, be it F-15s, nuclear weapons, or drone strikes.  And, the average citizen whose training is likely “once every once in a while at the range” is no match against a professional standing army.  So, since you can’t compete, we are told, why try?

In short, the argument is that if the government turned on you, there’s no stopping them.  Even with a professional militia of tens of thousands, how does one stop a well-funded, well-equipped, modern big tech assault force complete with facial recognition technology, computerized drones, and a standing army that would be complimented by the presence of today’s version of the brown shirts, like antifa and Black Lives Matter?  Who, by the way, have no problem firing upon American Citizens.

If the government goes tyrannical, any of us who would stand against them are likely already identified, and would be dead pretty quickly.

The reality that the government has at its fingertips the ability to snuff out any uprising against it does not negate the Second Amendment argument that the whole of the militia, which includes the unorganized militia of average citizens, shouldn’t be armed.  To that point, James Madison stated regarding standing armies that a way to protect us against tyranny would be not to allow a standing army against the people to rise in the first place.

On June 29, 1787, Madison said to the delegation at the Constitutional Convention, “In time of actual war, great discretionary powers are constantly given to the Executive Magistrate.  Constant apprehension of War, has the same tendency to render the head too large for the body.  A standing military force, with an overgrown Executive will not long be safe companions to liberty.  The means of defence agst. Foreign danger, have been always the instruments of tyranny at home.  Among the Romans it was a standing maxim to excite a war, whenever a revolt was apprehended.  Throughout all Europe, the armies kept up under the pretext of defending have enslaved the people.”

In other words, aside from arming the public, one of the ways to stop tyranny against the people is to not allow the military to operate on domestic lands in the first place.  Which takes us back to the first part of this whole thing; if the government has a military that is more than capable of overwhelming the populace, how do you keep them from doing it in the first place?

In the end it comes down to being a virtuous people.  Benjamin Franklin stated that “only a virtuous people are capable of freedom.”  If we are not a godly people, with godly leaders, adherence to the Constitution is the least of our worries.

While, yes, owning a gun is an essential ingredient to the preservation of liberty, disallowing the crippling effect of the rise of tyranny in the first place is also an essential part of preserving our freedoms.  Being armed is great, but if we don’t have election integrity, and a culture rooted in the moral foundations of a biblical value system, what’s the point?

The best defense against a fleet of drones against the populace is to have a government with enough moral integrity not to use them against the people in the first place.  Being armed sure doesn’t hurt the cause, but how many guns and how much ammunition nullifies a fleet of mechanical tools of tyranny with your face already logged into the search and destroy parameters?  If your local law enforcement has either thrown in with the tyrants, or no longer exists thanks to defunding and a federalization of local law enforcement, how long before your underground bunker is stormed and your guns are simply pried from your cold, dead fingers?

Don’t get me wrong.  When it comes to advocacy for the Second Amendment, they don’t get much more staunch than yours truly.  But, like with anything, there are so many more factors than we see on the surface.  Sure, I know our individual gun ownership is a key component in preserving liberty, otherwise the anti-gun folks wouldn’t be so adamant about their cause, and the tyrants in government wouldn’t have been freaking out over a bunch of unarmed folks visiting Washington D.C. on January 6, 2021.  And, drones or no drones, it’s hard to keep up the morale of a sick and twisted army of tyrants (of which I do not believe our organized militia or military is) when an armed populace out there begins using their guns to defend the public square against said tyranny with pop-shots and urban guerrilla warfare.

I'll keep my guns, thank you, regardless of how many drones may be flying around out there.