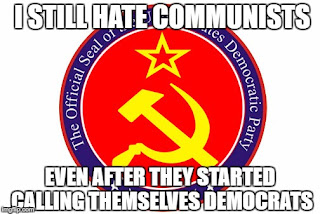 The Democrats have achieved through their hard work (of lies, thievery and deceptions) a position of power they have been dreaming of for a very long time.  They have the White House (with the perfect small brained puppets in place), the House of Representatives (though barely, even after cheating) and nearly the Senate (but what they do have is more radical than Vladimir Lenin).

Through their American Families Plan they are poised to exert federal control over some of the most personal aspects of family life, and though it really doesn't address the real child care, education, family leave, and health needs of families as it claims (which would all be unconstitutional intrusions into our lives, anyway), the plan does accomplish one thing they really desire: more government control over Americans and their families.

Since your racism is out of control, and the Democrats can't seem to hide their own racism that dates back to when they were the party of slavery no matter how much they try, they wish to purge you of those demons through government control, too.

After all, you can't be trusted. January 6th, according to the lefties, was “the worst attack” on the United States since, ever.  Never mind that video, pictures and testimony reveals that Democrat Party allies initiated the violence, and government lefties assisted in the whole madness as Trump supporters worked to deescalate it and keep it peaceful.  By the way, no guns were ever found, either, on a single Trump Supporter.

The Justice Department claims its unlawful to look into the left's election unlawfulness, and the European Union has decided that if you have a sense of humor you must be a right-wing terrorist.

The minimum wage debacle is backfiring, they are realizing the whole woke thing was a mistake, and the defund police thing was such a bad idea that now they are trying to claim it was a GOP idea.  But don't worry, Biden and Harris are so popular that ... wait, what?  Harris is the most unpopular V.P. in history (or, at least the last fifty years)?

They claim there is a pandemic of the unvaccinated, even though it's the vaccinated that are getting sick and are dying.

But, don't worry, the Democrats will stand firm to protect you from the greatest national security threat this country has ever seen ... The Republican Party.