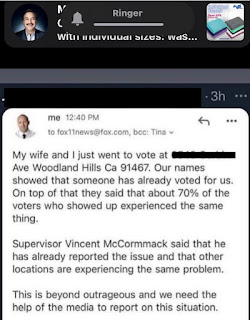 By Douglas V. Gibbs
Author, Speaker, Instructor, Radio Host
Despite an attempt to clean up California's voter rolls based on a judge's order, evidence that voters remain on the rolls who are not eligible to vote in California (due to a change of residence, death, or other reason) has emerged since the effort.  In addition, fraud which includes, but is not limited to, persons voting in the name of another person, has also revealed itself as being present in the recall election that, according to the numbers, Governor Gavin Newsom survived.

Prior to the election the Democrat Party recruited every big name Democrat they could for their media campaign, including former President Barrack Obama.  Though the recall effort was a grassroots endeavor that received no help from the State's Republican Party, the defenders of Newsom's tyrannical regime characterized the recall effort as being a "Republican Recall".
The leading candidate, Larry Elder, a nationally syndicated radio host, was characterized as an extreme radical, and a person who supports white supremacy.  Oh, by the way, did I mention that Elder is a black man?
Raised in South-Central Los Angeles (he is also known as the Sage of South Central), and a person who considers himself to be a "small-l libertarian", during the campaign preceding the election Elder was the favorite among Republicans.
After the election in which the "no" vote won, keeping Newsom in the Governor's Mansion, The Los Angeles Times editorial board called the victory a "sigh of relief" that "extremist, intolerant" Larry Elder would not be replacing him.

"Phew. After months of worrying about the fate of California, we will sleep easier now that Gov. Gavin Newsom will not be removed from office early and replaced by right-wing provocateur Larry Elder, a radio host with no experience in elective office and who doesn’t seem interested in being a governor for all Californians — only those who share his extremist, intolerant views," the board wrote.

The Times also claimed that the responsibility for the problems California has been facing are not Newsom's fault, calling any blame a "smokescreen" by conservatives and republicans.

"Voters evidently saw through the smokescreen that recall proponents threw up about how Newsom was responsible for every bad thing that has happened in California over the last few years: wildfires, COVID-19, homelessness, crime, income equality, and on and on," it wrote.

The Times board has also published a piece referring to Elder as "the Black face of White supremacy." It also apparently sought to downplay a racially charged attack on Elder by a woman wearing a gorilla mask.

"The decision to reject the recall is the best outcome for California. Even if you dislike Newsom, it would have been a disaster to abruptly hand over leadership of the state to Elder or any of the other 45 people listed on the replacement ballot in the middle of a public health crisis and with a regular election little more than a year away," the leftwing rag added.

The Times, in concert with the California Democrats, has claimed the whole recall effort was a scheme by Republicans to end the Democrat Party's one party rule of the state (Duh).  It was suggested that if the GOP wants to have a chance they would have to adjust their policies to appeal to more voters.
In other words, abandon one's principles, and become more like the Democrats; of which the State GOP has been doing, so not only has a mass exodus from California been in play, but also a mass exodus from the Republican Party towards being an independent.
The sudden leftward lurch of California after the Reagan era tells me that the progressive commie left has been stealing California since the departure of Reagan as governor of the Golden State.  However, performing a forensic audit of the election, with a super-majority in Sacramento, would be a doomed effort.  As a result, conservatives continue to throw their hands up and exit the State at a record pace, leaving any chance of getting to the bottom of the game of corruption or flipping the State back in the right direction a tough row to hoe for those who stand in opposition of the Democrats.
-- Political Pistachio Conservative News and Commentary
Posted by Douglas V. Gibbs at 11:09 AM