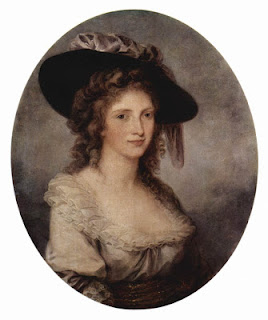 Elizabeth Powel was a great example of how not being able to vote, nor hold office, does not mean you can't be politically influential. She knew how to keep the republic.

Elizabeth Powel asked Benjamin Franklin, "Sir, what have you given us? A monarchy, or a republic?" Franklin responded, "A republic, ma'am, if you can keep it."

Her question was quite an informed one. She didn't ask "what kind of system did we get?" She didn't ask, "A monarchy, democracy, oligarchy, republic, confederacy, communal system?" She specifically knew what was going on in Independence Hall during the Summer of 1787. "Monarchy, or a republic?"

Elizabeth was the wife of Samuel Powel, the mayor of Philadelphia. The couple knew the movers and shakers of the era partly due to their business we would call today a 'bed and breakfast.' She befriended these gentlemen, and Elizabeth was especially good friends with George Washington. It was not uncommon to see Elizabeth and George strolling the streets of Philadelphia discussing politics.

It was Elizabeth Powel who convinced George to serve a second term, and it was she who suggested to him that rather than a royal-sounding title, "Mr. President" was appropriate.

Which brings us back to that conversation between Elizabeth Powel and Benjamin Franklin. He personalized his message to her. "If you can keep it." How could she keep the republic? She couldn't even vote!

She worked to keep the republic by being influential.
As did she, it is up to us to become more involved, to get to know these people, to stroll with them discussing the issues of the day, to be at city council meetings, to write our representatives at all levels of government, to remind them that that are our servants, and it is their job to do what is best for the country while also remaining within the authorities granted to them by governing documents like the U.S. Constitution, State Constitutions, or local ordinances.
-- Political Pistachio Conservative News and Commentary
Posted by Douglas V. Gibbs at 7:55 AM