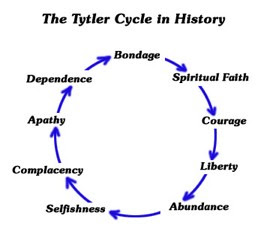 The link above is an organization for praying for America.  The image to the right is the Tytler Cycle.

The Tytler Cycle was created by Alexander Tytler (d. 1813) who surmised that the average system of liberty, or democracy, lasts between 200 and 250 years.  Last September we celebrated the 234th anniversary of the U.S. Constitution, and last July we celebrated the 245th year of the Declaration of Independence.  If Tytler was correct, we are nearing the end of our cycle.

According to Tytler, all systems begin in bondage.  But, from bondage, the people cry out to God.  It's like the old saying goes, "There's no atheists in a foxhole."

That crying out to God leads to repentance, and in the case of the U.S. about forty years prior to the revolutionary era, a Great Revival.

From Spiritual Faith a people becomes courageous, achieve liberty, and from that liberty comes abundance.  However, that is only halfway through the cycle.

Once prosperous, an average system becomes selfish, complacent, apathetic, dependent upon government, and ultimately returns back to bondage.

By observing what is going on in the United States at this time, it is clear that we are nearing the end of the cycle, stuck somewhere around apathy, dependence, and bondage.  To get back to Spiritual Faith, we must cry out to God, repent, and our culture must become virtuous again.

Of the five rights enumerated in the First Amendment, religion is listed first.  That is because it is the most important of all of the rights.  We must be in prayer if we are going to be able to stand firm, and do what it takes to preserve our liberty.