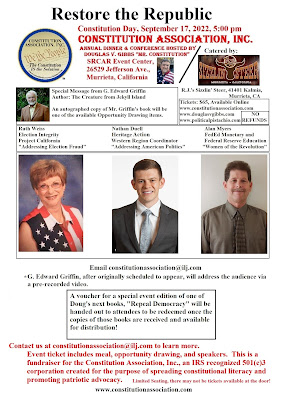 Today is Constitution Day, the 235th Anniversary of the signing of the document that established our governmental system.  The average constitution in the world lasts only 17 years, but ours has outlasted all of those by more than two centuries.
In 1787 a group of delegates from the various States of the fledgling United States of America gathered in Philadelphia with the aim to fix the Articles of Confederation.  It became apparent during the first six weeks of the convention during the Summer months of that year that a new constitution would need to be written.  James Madison had already provided a framework for the new constitution, so his proposal stood as the starting point.
39 of the delegates signed the final document, with three on that day refusing because it didn't have a bill of rights nor did it abolish slavery.  By the following year the minimum number of ratification votes was reached, and in 1789 the new government official launched, with George Washington serving as the first President of the United States under the new system.
September 17 is Constitution Day, and I've always wondered why it was never given the status of National Holiday.  I say, let's get rid of Labor Day, which was inspired by Marxism anyway, and replace it with Constitution Day.  Make the paid holiday the first Monday after September 17 for celebration, and when September 17 falls on a weekday instruct schools to suspend all classes and only have Constitution Day assemblies and education workshops (the Friday prior when it falls on a Saturday or Sunday) as the law requires (believe it or not).  .  In other words, let's use Constitution Day to get civics back into our schools.

The Constitution of the United States was designed to stand the test of time, and it has indeed endured over two centuries. For many, it is considered the greatest document every conceived, and it is held in high esteem by nearly all Americans. But, the appreciation for the U.S. Constitution does not stop there. The U.S. Constitution is also an object of admiration by peoples around the world. 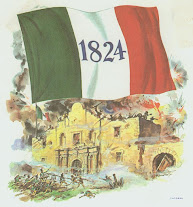 In 1824, Mexico actually created their own constitution that was largely modeled after ours. Dictator Santa Anna, however, hated it, and slaughtered Mexicans standing up for the 1824 Mexican constitution, drawing the United States into the conflict which resulted in the Mexican-American War, which was a war of liberation for the territories in what is today the southwestern United States - a region that invited American troops to defend them because they wanted to be separated from Santa Anna's bloody vision for Mexico's future.

I was once asked, "When did the attacks on our constitution begin?"  The answer is simple.  "Before the ink was dry."
A campaign against the American Constitution began long before the conflict to save Mexico's territories from tyranny began.  However, the attacks against the U.S. Constitution began internally, largely through judicial activism originally led by John Marshall, a student of big government proponent Alexander Hamilton.  Liberal theorists and activist judges have created an environment where the very foundations of this country have been seriously undermined, and are in grave danger.  Our core principles have been denigrated, and the Constitution has been twisted through their anti-originalism interpretation so as to bend and mold he Constitution into their Marxist leftist agenda, regardless of the original intent of the document.

Thanks to the rise of movements like the Tea Party, and the Trump Presidency, America's desire to become more informed as a result of the destruction of the system by the statists of American Politics is on the rise.  In our gut, because we grew up knowing liberty, we know that liberty is at risk. Americans realized that the statist agenda is dead opposite to the system created by the founders in the U.S. Constitution.  The violent hate for the Constitution by those who oppose the principles of the Constitution is becoming more and more apparent with each passing day.

This makes September 17th a very important day to many Americans. Suddenly, it isn't just another day, but an important observation of the day that the greatest governing document ever created was signed.

We the People are what the Constitution is all about. The document limits the authority of the federal government so as to protect the people from tyranny. The more of us that understand this, and demand a return to the original intent of the Constitution, the greater the chance we will reach a tipping point that will lead us back to liberty.
The flash point of our generation, the moment when things drastically change because Americans will not tolerate any more the insurrection being committed by those holding office against our Constitution, is nearly upon us, and we need to be ready to stand firm in support of our beloved American System of Liberty as it was established under the United States Constitution.

The Constitution has endured for over 200 years, and its enduring integrity cannot be taken for granted. We must be educated regarding the Constitution's principles, and we must fight in the civic arena to preserve the Constitution, for our liberty's future depends on it.  Prayer and education are the first steps.  To be an advocate for the Constitution we must understand it; we must know and appreciate why our Constitution is so precious...and then, it is our right, and our duty, as Americans to be advocates for the U.S. Constitution.
Restoring the Republic begins with prayer, education, and you.


-- Political Pistachio Conservative News and Commentary
Posted by Douglas V. Gibbs at 4:43 AM