Remember when the Obama presidency, the experts in the executive branch, his minions in Congress, his minions in the media and his minions on the streets tried to convince America that the Tea Party movement, military veterans and supporters of the Republican Party were capable of violence, and that we were somehow all a bunch of domestic terrorists?  Yet, the violence from the right-wing never manifested as the liberal left predicted.  Tea Party rallies were peaceful, and no mass shootings by Republicans ever happened.  When mass shootings did occur, the shooters always turned out to be Democrats.  But, the media conveniently didn't discuss that part of the news.


Now, the tables have turned.  A Republican President is in the White House, and the GOP has a majority in both Houses of Congress.  It turns out that a great number of extremist Democrats are actually everything the leftists accused the conservatives in America of being capable of.  The Domestic Terrorists are not from the GOP.  They are Democrats.  And the violence we are seeing was in the plans all along.

Violence against Republicans, conservatives, and Trump supporters, even shootings of Trump supporters, has become old news.  We are being desensitized.  It began with Black Lives Matter, and with the snowflakes during the presidential campaign, and has been gaining momentum ever since.

The latest in the chapter of violence against the GOP by Democrats, however, has launched into a whole new realm.  The latest news currently being covered is a story about a shooter who walked up to a baseball practice comprised of Republican congressmen and their staffers, and then the leftist Democrat opened fire.  The shooter, online, was a sufferer of Trump Derangement Syndrome, brought on by the liberal left Democrat Party's hateful rhetoric and the complicit liberal mainstream media.  He was simply doing as he has been instructed.

Earlier this year, in January, Tim Kaine, Hillary Clinton's running-mate in the presidential election, said on television that the Democrat [voters] need to take the fight to the streets.  His was but one of many calls for such violence.  Kathy Griffin with her image holding the severed head of President Donald J. Trump doubled down on the call for violence, and the removal of Trump and his allies from their positions in the U.S. Government.  And now, Democrat voters are responding to their instructions.  But, they simply believe lies, have fallen for a false hysteria; the blood is actually on the hands of the liberal left Democrat Party politicians and the biased liberal media, for inciting such violence. 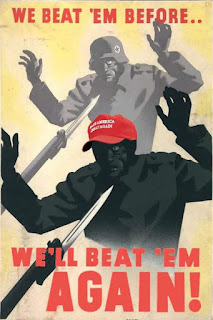 In a terrorist style much like that of a Muslim jihadist, in a violent manner demanded by the antifa anti-Trump mob, and a violent action envisioned and encouraged by multiple celebrities, hardcore liberal left James T. Hodgkinson, 66, still distraught over the 2016 Presidential Election, opened fire on GOP personnel at the baseball practice in Alexandria, Virginia, and only the fact that there were good guys with guns on the scene was Hodgkinson stopped from killing everyone on that baseball field.

The foot soldiers of the far left Democrat Party regime have been convinced from leftist Democrat Party propaganda that America is experiencing what Germany experienced when Adolf Hitler rose to power.  Hitler was elected after fooling a segment of the people, and the rational argument since World War II has always been that if the people who realized what Hitler truly was had only stood up to him, defeated him, and killed him and his supporters, Germany would not have fallen into the clutches of the Third Reich, and the horrifying events that followed could have been avoided.

The American followers of the Democrat Party's drive for their own Reich do not realize they are deceived tools for the exact kind of fascism they believe they are standing against.

The Marxists, communists and fascists of the Democrat Party have launched a strategy of deception, projection, and a new generation of brown shirts who fanatically believe that their violence is honorable, and necessary, to save America from some kind of a Fourth Reich perpetrated by the GOP.

The Democrat Party lemmings have been activated after a lifetime of indoctrinational public schooling, entertainment industry propaganda, and mainstream media instructions.  They have been trained to resist Republican rule, to institute mob-rule, and to end all opposition to the Democrat Party narrative and agenda.

But, the violence is acceptable, to these people.  The ends, after all, justify the means.  They are moral supremacists.  Their liberal left Democrat Party cause, they believe, is a cause worth killing for. 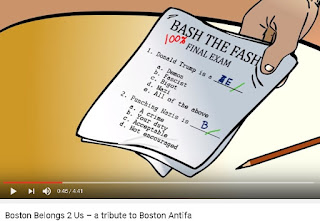 The shooter at the Republican baseball practice, Hodgkinson, was a big-time Bernie Sanders fan, and a Rachel Maddow superfan.  His Facebook page was slathered with photos of Senator Bernie Sanders.  In posts last August, Hodgkinson wrote, “I want Bernie to Win the White House” and “Bernie is a Progressive, while Hillary is Republican Lite.”  At one point, Hodgkinson volunteered in Sanders' presidential campaign. His social media pages screamed "It's time to destroy Trump and company."

Hodgkinson was killed when good guys with guns, including local police and congressional security, returned fire.

Majority Whip Representative Steve Scalise (R-La.), two Capitol Hill police officers, and a congressional aide, were reportedly injured in the attack.  The game is still going to go on, however.  The players of both teams (Republican and Democrat) are going to wear LSU (Louisiana State University) jerseys to show their support for Scalise's recovery.

As a result of the shooting, Congressman Scalise was reported to be in critical condition.  He underwent surgical procedures to treat his gunshot wounds.  He experienced wounds to internal organs, and more surgeries are still expected.

The shooting is but another manifestation of a violent pattern being perpetrated by the left-wing.  Hodgkinson opening fire on Republican congressmen and their staff is only the beginning because other shooters, like Hodgkinson, will believe it is their progressive duty to do so.

The leftist reaction to the shooting has been celebration, and an encouragement of more violence.

New York Representative Claudia Tenney received an email shortly after the shooting that read, “One down, 216 to go.  Did you NOT expect this? When you take away ordinary peoples very lives in order to pay off the wealthiest among us, your own lives are forfeit.  Certainly, your souls and morality were lost long before. Good riddance.”

Remember, the left-wingers are convinced by propaganda that goes back more than a hundred years.  The Democrats are for the poor and the Republicans are for the rich, despite the evidence that all Democrat Party policies are destructive to the poor, and holds up the wealthy and powerful. 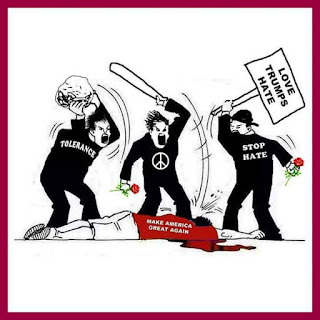 The hard left crazies do not understand that.  Their lifetime of leftist training doesn't allow them to conceive of the possibility that their religion of Marxism could possibly be dangerous, a failure, or the actual embodiment of the fascism, hate and totalitarianism they claim to be standing against.  It is the liberal left progressive socialist Marxist Democrats who are creating an environment of violence and intimidation.  It is they who are becoming increasingly hostile, racist and intolerant.  It is the liberal left Democrat antifa crazies who are dividing this country because they believe a well-orchestrated hate-campaign against Donald Trump and the Republican Party that in reality has no truth to it.  It is a false religion.

One of Virginia Representative Tom Garrett’s town halls last month featured a heavy police presence after Garrett and his family were targeted by repeated death threats. “This is how we’re going to kill your wife,” read one such message.

The person behind the message to Garrett was a Tucson Unified School District employee who also left threatening messages for Arizona Representative Martha McSally stating that the congresswoman's days were “numbered.”

The same day Wright was charged, police in North Dakota escorted a man from a town hall with Representative Kevin Cramer after the man became physical with the Republican congressman and shoved a fistful of money into Cramer’s collar.

California Representative Tom McClintock’s town halls in February shows police escorting him to his car afterwards, as emotional protesters chanted “Shame!” At least four tires were slashed outside the town hall.  Also in February, a 71-year-old female staffer for California Representative Dana Rohrbacher was knocked unconscious during an angry protest activists staged outside Rohrbacher’s office.  Alabama Republican Mo Brooks announced shortly afterward he would hold off on holding public town halls out of safety concerns. “I want things to settle down a little bit before I’m willing to subject citizens to bodily harm or damage to their personal property,” he explained. Texas Representative Louie Gohmert similarly put a hold on town halls, “until the threat of violence at town hall meetings recedes.”

A popular parade in Portland, Oregon was canceled in April after threats of violence were made against a local Republican organization taking part.

Pro-Trump commentator Milo Yiannopoulos had his speech at the University of California-Berkeley cancelled after rioters set the campus ablaze in order to keep him from speaking.

Those same activists were able to shut down pro-Trump commentator Ann Coulter’s UC Berkeley speech just by promising a repeat performance of the Milo riots.

A month before the election, someone firebombed a North Carolina GOP office. A building adjacent to the office was spray painted with a warning: “Nazi Republicans get out of town or else.”

Educational institutions are no exception, as Republican students have been targeted there as well.

The day after the election, sophomore high school student Jade Armenio was attacked after she expressed her support for Trump on social media. Armenio, who was white, was attacked by another female student, who was black. The attacker ripped Armenio’s glasses off and punched her in the face. The attack was caught on video.

The president of Cornell University’s College Republicans, Olivia Corn, said she was physically assaulted the night after Trump won the election.

A Maryland high school student wearing a “Make America Great Again” hat after the election was punched and kicked by students protesting Trump after he started arguing with them.

Similarly, police in Florida arrested a 17-year-old high school student after he punched a classmate for carrying a Trump sign at school.

In another instance of post-election violence directed at Trump supporters, 24-year-old Corey Cataldo was reportedly attacked on a New York subway for the crime of wearing a “Make America Great Again” hat.

Conservative Commentator Michael Savage says that the United States is at a boiling point, and that there is going to be a civil war as a result of the violence by the Marxist revolutionaries of the Democrat Party resistance movement.  Ann Coulter also warns that the live-fire by the "Resistance" has only just begun.

Has the gun laws worked in Chicago as gun violence and black on black killings continue to skyrocket?  Has the gun laws in Europe worked as terrorists use guns to mow down their victims (when they aren't using cutting instruments and vehicles)?

Violence by the Democrats, and their call for gun control as a result, is not about safety.  It's about control.  And to gain that control, the violence of the left-wing crazies is being ignored, and the safety of the members of our society is but an obstacle for the emergence of the great utopia, led by a Democrat Party elite, unopposed because all those willing to oppose them are in the process of being removed, or silenced, by the terror tactics of the Democrat Party's own version of the Brown Shirts.

"The meaning of peace is the absence of opposition to socialism." - Karl Marx

-- Political Pistachio Conservative News and Commentary
Posted by Douglas V. Gibbs at 9:06 AM