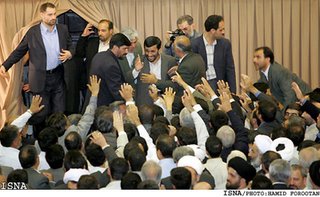 United States officials stated that there have been positive statements from the Iranian government regarding their wish to play a positive role in Iraq. A similar assessment of Syria has been offered.

The Associated Press made a bold observation when they stated in a recent story regarding this that those statements haven't been backed up by actions. The problem is not what they say, the problem is what they do.

Well, at least the American Press has finally figured out how to recognize the obvious.

But don't hold your breath.

Tom Casey, Deputy Spokesman at the State Department, said, "What we would like to see the Syrians do is take actions to, among other things, prevent foreign fighters from coming across the border to Iraq."

I agree. I would also like to see the United States take action to, among other things, prevent illegal invaders from coming across the border to California, Arizona, New Mexico, and Texas.

During the weekend summit hosted by Iranian President Mahmoud Ahmadinejad of Iran the leaders of Iran, Syria and Iraq discussed how to curb the runaway violence supported by Iran and Syria. But the resolution from these nations, I guarantee, has nothing to do with quelling the insurgency that they support, arm, and finance.

A friend of mine, Jim Stewart (author of The Ghosts of Vietnam), says that the words from Ahmadinejad's mouth to the Iraqi leader were probably something like, "Kick out the Americans, or we will destroy your new democratic government."

Jim's probably right, but I submit that the words were probably more like, "We are going to detroy your new democratic government anyway, so you might as well help us kick out the Satanic American soldiers. It'll be easy, now that the foolish Democrats have gained control of the American Congress."

Here's where I think Bush is succumbing to the idiot left. As this weekend summit in Iran is taking place, the U.S. is actually considering recommendations that could include a broader role in the region by Syria and Iran.

That's like asking Michael Moore to be speaker at the Republican Convention.

Another recommendation was to shift U.S. military focus away from combat and toward training the Iraqi forces.

Isn't that what we are doing? But the military focus must remain in place so that our troops aren't getting picked off one by one as they attempt to assist in the training of the Iraqi forces. Increasing troop level so that we may have enough people over there to train and protect may be necessary for this to transpire.

And while all of this is going on a discussion regarding how many troops to keep in Iraq ensued.

What a surprise. Here's what I can't figure out. The left has accused the Bush Administration of going into Iraq without enough force support, yet want to dwindle the numbers. The idea of cut and run has been discussed again and again, but isn't it a contradiction to what they originally said a year or two ago?

If anything, however, as I stated a couple paragraphs ago, especially if the focus is going to be training the Iraqis, the U.S. troop levels need to be boosted. Use existing numbers to protect the Iraqis, and increase numbers to assist in the training of the Iraqi forces.

Another key, I believe, is to get Iraqi troops that are ready out to fight in the areas where they are needed. I believe that if we dwindle the American forces currently in the region we will face two problems. One, our presence will be required longer; and two, it will embolden the enemy and place the democracy in Iraq in danger as well as snowball the situation against Israel.

One thing I am happy with is that General Peter Pace, chairman of the Joint Chiefs of Staff, has asked a group of military members, mostly made up of Colonels who have recently served in the Gulf region, to look at what is going right or wrong in the war and to discuss options for progress. This is where the decisions need to be based upon. The Bush Administration ought to pay careful attention to what these military people say. They are the ones involved directly in the conflict. They are the people that will recognize what is realistic in the sense of goals, and what absolutely won't work in the region.

The primary key, as I see it, is to get the Iraqi security forces to be able to operate in an independent manner, on their own. If we don't ensure this, once we leave, if we leave, they will be overrun by Iranian and Syrian backed insurgents, and Iraq will become a larger problem, rather than the properous ally we would like to see them become.
Posted by Douglas V. Gibbs at 8:53 PM

Defenetly gotta keep an eye on that crazy f---er. And now Bush's invasion and occupation has made it easier for him to create a "greater Iran." Great. Thanks Bushies.

Huh? Occupy? Do you want to stand by that statement.