Saddam is sentenced to death, says the radio, on the eve of election day 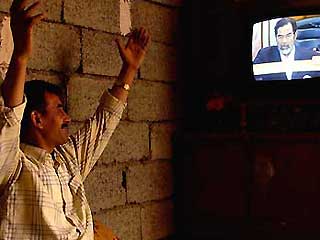 I got on the road this morning at four in the morning. It was a little early for me. Usually I am on the road somewhere between four-thirty and five a.m. I work in the construction industry, which is a surprise to some people because of a few of my medical ailments that seem to haunt me. Nonetheless, as I drove my work truck to my big rig with the two members of my crew with me, the news story comes on the radio stating that Saddam Hussein was convicted and given the death penalty for his crimes. One of the guys says, "Serves the bastard right." The other says, "Killing him won't solve anything, other than that it is okay to kill. Violence begets violence."

After talking further with this individual, I am happy to say that he doesn't vote.

Newt Gingrich said it best, I think, with these points. First, Saddam's conviction shows that the Iraqi people are far better off today under the rule of law than under the rule of a dictator that killed at least 300,000 Iraqis. Second, America was right to replace this evil dictatorship and to give the Iraqi people the chance to be a free and self-governing nation. Third, Saddam's conviction should send a message to every other dictator on the planet. The message says to these men that if you kill, torture, or destroy your own people, one day, given the chance, your people may destroy you. Fourth, and finally, the verdict reminds all of us about the current fecklessness of the United Nations. After completely failing to protect the Iraqi people from Saddam's terror, when Saddam was convicted for his crimes all the United Nations could talk about was saving Saddam from the death penalty. This reminds us that the United Nations today is a clearly broken institution focused on the preservation of the status quo, even when it is a status quo that tortures, mutilates and destroys human beings.

I asked my co-worker, "If someone came into your home and mercilessly murdered your mother and father and brothers and sisters in front of you, would you support the death penalty then?" 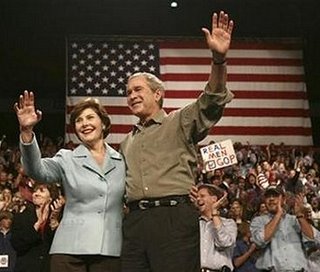 Vote on November 7th! According to Robert Novak the Democrats are set to win 19 House seats and two Senate seats. Vote, my fellow Republicans! Let's not allow the liberal left to do the horrible things that they are promising!
Posted by Douglas V. Gibbs at 6:59 PM

Newt's remarks are right on!

Hang'em high! The expect another verdict for the Kurd killings.

I'll be heading out here in a few to vote myself Doug...

That was an extremely great example of why we Conservative types cannot allow a complete take over of the Liberal left. Semper Fi.

If you want to chart a new course, a new direction for the United States, vote Democratic!

So, where will this new course be taking us?
More taxes? More Liberal policies? More Liberal Judges?
Are you like the ones I have posted at my site? If that is your type, we will need alot of help!

I had an interesting day at the polls. When I arrived all of the stands were occupied but one. I went to the unoccupied booth, voted, and left. The people there before me were still voting. I had studied all of the measures, and candidates (including the local ones) and knew what I was voting for going in. People had their booklets, were re-reading the propositions. Don't get me wrong, I don't want people in there indescriminantly hitting buttons, but howabout knowing what you plan to vote for before you arrive. Some folks act like it's a mid-term, or something. Just an observation.

GREAT points Gibbs. I have done exactly as you have. I studied the props, and researched etc.. Some were a little difficult. I had to research ALL the judges because the book said nothing of them!
(I'm an absentee voter- San Diego)
In case ya don't know and I am in NY right now....they say Hillary has been re-elected! Booooo!

One commenter (not on my site) recommends to vote NO on all the props. Reasoning is: because they usually are not good.
Well, I beg to differ for that!
There are some good ones on the ballots sometimes.

'Some folks act like it's a mid-term, or something.
That's funny! But sad.

Thanks for stopping in Gibbs.
Made me sick and dusgusted at what these Libs said to me!

I'm sick and disgusted whenever a liberal's lips start flapping.

Well we'll be hearing a lot of their flapping now since they've got the House.

Don't be offended, Mudkitty. Even though I am fair, allow freedom of speech, and allow you a fair shot, I am still a conservative that believes the left spews a lot of crap.

Hey Gibss, I would like to add you to my American Patriots Blog roll. Permission to do so?
take care
FTGF!

And vice versa, but really. I mean, you seem in some ways a really cool cat.