What "Cut-and-Run" really means to the world! 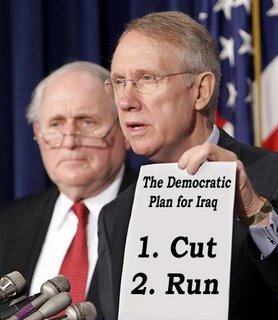 Liberals constitute about a third of the electorate, and a lot of them don't even vote. The swing voters, and misguided Republicans, are the reason for the Democrat Coup of Congress on November 7th.

Now, as a result, the judicial system will begin that long march to the left because the Senate will not be accepting any conservative judges chosen by Bush any time soon. Be ready for tax increases, and an elevated unemployment rate as the minimum wage is increased. The welfare system is going to take most of that extra tax money, and land in the pockets of illegals. Dependence of foreign oil will increase as no domestic drilling will be allowed, domestic oil will be taxed higher, and the search for alternative fuels will fail due to liberal corruption. With the borders falling, and amnesty on the horizon, prepare for the beginning of the end for America's sovereignty as a North American Union is ready to emerge, modeled after the European Union. And be ready for our national security to be compromised. Nobody desires America to be more vulnerable to terrorist attack, but the consequences of the recent election is simply that a terrorist attack on America is now more likely. The left-wing congress will see to it that terrorist surveillance programs are history. Aggressive interrogation of terrorists will cease. They will being dwindling the number of troops in Iraq, making that country's future look bleak.

Let's take a look at what our departure from Iraq will create.

IranÂ’s ascension will be emboldened by our cut and run from the region. Our allies in the war on terror will doubt our resolve. The nations with troops in Iraq will be forced to cut a deal with the terrorists as a matter of survival. The level of danger pointed at Israel will be increased. North Korea will be emboldened as well.

Now that the left has gained control, they will spend the next two years consolidating their gains, placing obstacles to any challenging forces and complete their goal of fooling the American electorate completely for the next elections.

The world is in danger if we cut and run, and the fall of America as a major global player could be at risk. We may not see this immediately, but the world our children will reside in will be a place very different than where we live now, with a lot less in the way of freedoms.

"Fight the Good Fight" at Navytown USA has a related story regarding Brigitte Gabriel and the question regarding "Why they hate us." Click HERE
Posted by Douglas V. Gibbs at 6:08 PM

I appreciate your thoughts and opinions Gibbs. It is easy to see the things you talk about in your posts.
It all will become reality if we do nothing.
Keep FTGF!

It should be interesting seeing how all pans out. We just have to keep up the good fight, in the words of Sean Hannity recently, "we have to be the loyal opposition..." to all that is wrong and misguided.

I've still got my fingers crossed that they will implode, but with the msm on their side it tends to make reality diffictult to grasp for many.

Unfortunately liberals do vote. In King County there were instances when even dead liberals made it to the polls in 2004. Now that's commitment.
Nor was this an isolated event.
In Poughkeepsie New York, close to where I live, almost 2600 registered DEAD voters made it to the polls.
In New York's 62 counties..45 had voters who already had passed to the other side. And they came back to vote!

I suppose it could have been worse.
In Pierre South Dakota, a woman who died two months before the election won a county commissioner's race in Jerauld County.
It wasn't disclosed how she voted.

Phased redeployment to outlying reagions and nearby countries is not cutting and running.

This cut and run republican mantra is like a jr. high school guy being AFRAID to appear weak. That, any high school counseler can tell you, IS weakness.

Redeployment is cut and run. Nearby countries is not in Iraq and outlying regions is not where the security is needed. Come on, mudkitty, it not a worry of appearing weak, it is a worry of allowing the terrorists to regain a stranglehold on that country.

I don't know about the logic once again.
You go it right Gibbs.
FTGF!

Even Bush admits, and virtually every intel agency in the world reports, that the terrorist problem there is worse now, than before we (wrongly) invaded.

And the problem isn't terrorists, it's insurgents. Big dif. Terrorism is a fact of life that will always be with us, all over the globe. The insurgency is something that exists because of the occupation. If the terrorists decide to hit us over here, we'll be over there! How stupid is that?!!!

I'm reminded of the chicken-race in "Rebel With Out A Cause." That's what you Stay The Coursers sound like...the scene at the edge of the cliff.

Like I've said, you have your illogical views. Well said in that regards.
FTGF!

You two sentances don't go together. They're illogical.