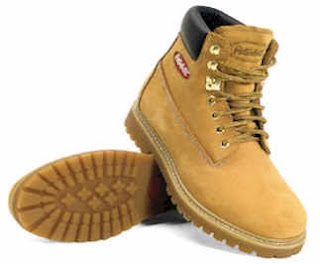 My work boot came untied today. When it happened, I was on a grading tractor. Normally, I operate a trenching machine, but I had the opportunity to operate a different machine today, so I took advantage of it. After all, a tractor is much easier to operate, and as an American in today's society, aren't we always looking for the easiest tasks?

I looked down at my untied boot, wondering if I should even bend down and tie it. After all, things were moving quickly, and in my line of work, constant speed and non-stop work is the key. You stop for nothing, unless it benefits the forward progress of the operation.

If I were a liberal, I got to thinking, I wouldn't even consider tying my boot. Why would I? It wasn't my fault the damn thing came untied. In fact, I wouldn't even be wearing work boots if my employers did not require that I wear them.

But why stop there? In reality, is it really my employer that requires me to wear work boots, a hard hat, and long pants? Isn't the reason I have to wear that gear really the fault of the Occupational Safety & Health Administration?

OSHA is a government agency. In fact, it is a federal agency. So, essentially, the federal government requires me to wear this so-called safety equipment on the job, which means that I must wear work boots that are prone to coming untied.

And who is the leader of the Federal Government? That's right, George W. Bush. So, my work boot coming untied is ultimately Bush's fault, and if I were a liberal, I wouldn't tie my boot. And since the necessity of wearing such a boot is ultimately Bush's fault, and if I didn't have to wear such boot I wouldn't have to tie it in the first place, as a liberal I would have the legitimate belief that since it coming untied is not my fault, but it is Bush's fault, I should demand that a federal agency (FEMA?) send out a representative to tie the boot for me. And if they refuse to do so, and I should become injured because of my untied boot, it would be in my best interest to sue the Federal Government.

Of course, the government doesn't have a problem with illegals tying their own boots. Haven't you heard? The illegals are willing to do things that Americans just aren't willing to do, and besides, they probably double-knot their boots.