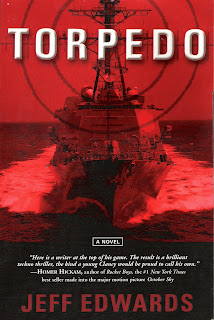 Jeff Edwards is a retired U.S. Navy Chief Petty Officer and an Anti-Submarine Warfare Specialist. He chased Soviet submarines during the Cold War, and launched cruise missiles in the Persian Gulf. His twenty-three year career spanned the globe. He is now an expert civilian consultant to the Naval Space Warfare Systems Center and the Fleet Anti-Submarine Warfare Command, the Navy's think tank for high-tech undersea warfare.

Jeff Edwards is also the author of Torpedo, a book with a plot ripped from today's headlines. Torpedo was the winner of the 2005 Admiral Nimitz Award for Outstanding Naval Fiction from the Military Writers Society of America (a writers organization I am also a member of). Jeff Edwards is a member of both the Military Writers Society of America, and the American Authors Association(of which I am also a member of as well!). Saturday, June 23, 2007 he will be my guest on Political Pistachio Radio to talk about his book (which combines an accident at a nuclear power plant, and illegal arms deal, and a biological warfare attack to ignite a crisis that would pull Europe, the Middle East, and the U.S. into an all-out war!), Torpedo, and the state of the art weaponry referred to in the book.

Tune in to the broadcast live at 4pm Pacific/7pm Eastern, or catch the archive later right here at Political Pistachio. Call in to the show to ask him questions (646) 652-2940, or Yahoo Instant Message me (ID: douglasvgibbs).

Sunday, 6pm Pacific, June 24th, 2007 I will be the guest on Independently Correct Radio hosted by Paul Couturier to discuss the ferocity of my recent blog posts, and the Gay Marriage initiatives in Massachusetts.

Tuesday, 4pm Pacific, June 26th, 2007 I will be the co-host of Triple Threat on Daniel Myers Live radio show to discuss current events, and challenge the liberals with some conservative wisdom.

As an added note, My Point Radio is not going to broadcast on Saturdays directly following PPR for a while. Their upcoming schedule is as follows:

Also, Jenn of the Jungle from Screw Liberals dot com has her own show on Sundays at 2pm Pacific, so give it a listen. It's a little wacky, a little hard hitting, and a whole lot of fun.

And Finally catch Andrea Shea King on BlogTalkRadio Monday through Thursday at 6pm Pacific Time, and join the chatroom for her show at www.askshow.com.

For the next week I will be at my little slice of heaven on the Oregon Coast - Gawfer's seen the pictures, he knows! Anyhow, be rest assured, I will still pay the local library a visit to post my articles, and check my e-mail! And those two shows I'm going to be a guest on will be from a wooden deck overlooking a marvelous landscape of American forest! Tune in to those two shows, you might hear a description of what I see, and why I'm there!