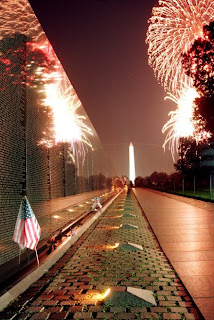 America gained its independence 231 years ago. The independence this nation gained was from the control of England. King George had determined that the American Colonies should continue to be controlled by The Crown when the American Colonies declared their independence, using the words that "We hold these truths to be self-evident, that all men are created equal, that they are endowed by their Creator with certain unalienable Rights, that among these are Life, Liberty and the pursuit of Happiness."

For those that argue that this nation is not founded upon Judeo-Christian principles apparently didn't notice those words - "created" and "Creator" in the Declaration of Independence. This also dismisses the current version of what people believe to be the "Separation of Church and State." That separation was designed to ensure that the government did not get into the business of the church, not the other way around.

Notice that among these are the "pursuit" of happiness. We are created equal, but it is by our ambitions, drive, or whatever that determines our success, and the Declaration of Independence recognizes that. There is no mention of "fairness" or "wealth redistribution." Our nation was founded so that the "opportunity" of a better life is available. This opportunity is to be worked for, not given, and only to those that value this nation and what she stands for.

In other words, earn it, and the government has no business taking it away and distributing such earnings to those that did not earn it.

I am proud to be uniquely American.