Judicial Tyranny and the Intent of the Founding Fathers 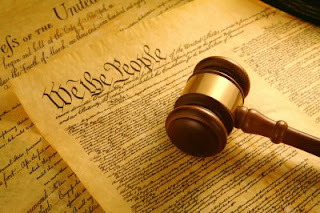 Let's set aside case law, and the web of Constitutional Law, for just a moment, and think with our logical brains.

We know that the Founders of this nation desired a separation of powers. They did not want too much power to drift into the hands of any one person, or tyrannical group of governmental bureaucrats. Our representative government was designed to protect the people from aristocracy, where people who are never elected wield power over the people, regardless of what the people think.

Now, let us consider today's judiciary, and the ease in which they strike down laws, even those voted on by the people, such as Proposition 8. Now, I don't wish to get into the particulars, I just want us to look at this in a general sense.

Ask yourself if this is what the Founding Fathers intended.

A judge in the U.S. District Court by the name of Vaughn Walker, who has a personal interest in the outcome of the Proposition 8 case because he is gay, and a man never elected into his lifetime position, determined that 7,001,084 California voters were wrong, struck down the state constitutional amendment that they voted for, essentially sending the message that the opinion of a single person interpreting a amendment that was never intended to address gender or behavior was more important than the vote of the people, and did so because he feels language should be redefined to justify the actions of a group of people practicing unnatural behavior.

Since when should one person in a black robe be able to dictate to 7,001,084 people a change in the definition of language?

The arrogance of judicial power: Homosexuals hijack political process for their own ends - The Washington Times