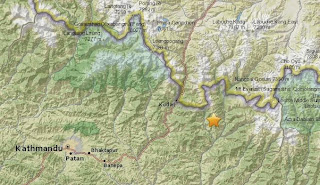 The large quake triggered landslides (many of which block mountain roads), toppled buildings, and has left many homeless.  The Sindhupalchowk and Dolkha districts were the hardest hit, northeast of the capital.  The earthquake was followed by at least eight strong aftershocks.

The April 25 earthquake had been followed by dozens of aftershocks, and the country was already asking for billions of dollars in aid from other countries.  Rain is adding to the difficulties.

Shaking from this earthquake was felt across northern India, where at least three people were killed due to collapsing rooftops.  Regions in Tibet also reported that they felt the rattling of this earthquake, as well as minor landslides.