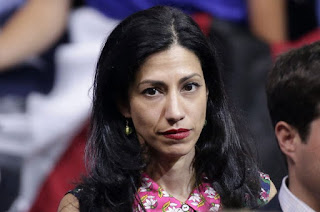 Isn't it amazing that the Democrats say they know everything, until it comes to scandals?  Then, they know nothing.

Huma Abedin is acting very Clintonesque when it comes to her estranged husband's (Anthony Weiner) computer, and the fact that it was packed with Hillary Clinton emails.  She says she knows nothing about it.  Full ignorance.

Or, as Dinesh D'Souza pointed out in his film "Hillary's America," when caught, the Democrats "Deny, Deny, Deny."

The Washington Post reported that Huma Abedin, Hillary Clinton's closest aide, was not a regular user of the laptop in question, and her lawyers did not bother to search the device for work-related emails after she agreed to turn over such messages to the State Department.

Now that the FBI has gotten into Anthony Weiner's computer over his perverted chase of a 15 year old, it has been revealed that the computer holds at least 10,000 emails of interest to investigators.

While the Clinton camp says they are simply duplicates (nothing to see here, move along), law enforcement officials say otherwise.

The New York Times says Clinton allies have suggested that Hillary Clinton should distance herself from Abedin.  Rumors about them being lesbian lovers, and a history of standing by each other, means it may be emotionally difficult for the presidential candidate to abandon Abedin - especially since the relationship, at least from a professional standpoint, is two decades old.

Clinton's team has also already made a major investment in Huma, defending her unusual employment arrangement in which Abedin was paid by the Clinton Foundation, a consulting firm called Teneo and the State Department all at once.

"We of course stand behind her," Clinton campaign chairman John Podesta told reporters, adding Abedin has "completely and voluntarily complied with and cooperated with the investigation."