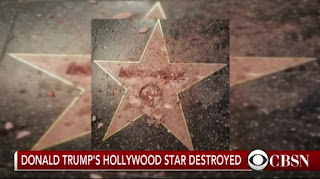 Last Weekend I stood with Trump Supporters in Beaumont and Banning, California, and here is what I noticed. . . The people who were anti-Trump were not just loud and angry sounding, but violent. At one point a half-filled Arizona Ice Tea can was thrown at us. The language used was profanity laden, and in some cases threatening. We were called every name in the book, including "Faggots." Hmmm, I though the Democrats were "sensitive" to the gay agenda.

The media is fueling the fire, doing all they can to not only promote the Hillary Clinton campaign, but to stir anger and violence among her supporters while also ignoring and downplaying violence against Trump supporters.

I have been told that people are afraid to put Trump bumper stickers on their vehicles because cars that do have pro-Trump stickers are "keyed."  Pro-Trump yard signs are stolen or damaged.  And the assaults are getting worse.

On top of all that, the Project Veritas videos have been exposing that the violence, and the taunting of Trump supporters to make Trump's folks seem violent, is all a part of the game.  Democrat operatives like Robert Creamer and Scott Foval acknowledge in the James O'Keefe videos that they are not only using dirty tactics against Trump's GOP campaign, but they've been playing these kinds of games for fifty years.

With all of that said, it is no surprise that someone took a sledgehammer to Donald Trump's Hollywood star, destroying it beyond recognition.

Remember, they have no respect for private property.  The leftists don't believe you should have any property rights.  With that in mind, why would they be worried about destroying property they don't believe is important anyway?

-- Political Pistachio Conservative News and Commentary
Posted by Douglas V. Gibbs at 3:11 AM