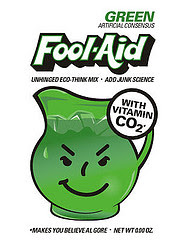 The man-made Climate Change hoax is something the Democrats believe must be protected at all costs.  They fear being revealed as liars, so anything, or anyone, that does not support their narrative is silenced, and discharged.  According to a new congressional investigation, when a top Department of Energy scientist dared to provide scientific information that did not fit the leftist narrative, and was too willing to work with Republicans in Congress, he was fired.  The Obama administration subsequently intimidated staff at the Department of Energy in order to further its climate change agenda.  A report alleges the Obama administration ordered top officials to obstruct Congress in order to forward his mythical man-made Climate Change agenda.

The top DoE scientist liaised with Congress on the matter, and he was fired by the Obama administration for being too forthright with lawmakers, according to the report, which provides an in-depth look at the White House’s efforts to ensure senior staffers toe the administration’s line.

The report also provides evidence that the Obama administration worked to kill legislation in order to ensure that it could receive full funding for its own hotly contested climate change agenda.

The report additionally reveals a discovery that efforts by the Obama administration to censor the information given to Congress, interfering with the body’s ability to perform critical oversight work, has emerged.

“Instead of providing the type of scientific information needed by Congress to legislate effectively, senior departmental officials sought to hide information, lobbied against legislation, and retaliated against a scientist for being forthcoming,” Smith said in a statement. “In this staff report based on lengthy record before the committee, much has been revealed about how senior level agency officials under the Obama administration retaliated against a scientist who did not follow the party line.”

“Moving forward, the department needs to overhaul its management practices to ensure that Congress is provided the information it requires to legislate and that federal employees and scientists who provide that information do so without fear of retribution,” Smith said.

Every environmental move the Obama administration makes is in the interest of pushing their man-made Climate Change agenda, which is a globalistic scheme of internationalism.  However, with Hillary Clinton losing her bid for the White House in the 2016 Presidential Election, and Congress remaining GOP red, the Democrats are getting desperate.  So, in his final weeks, Obama is pulling out all the stops, and is doubling-down on the environmental agenda.

Obama can't depend on Congress, so he is taking the steps on his own with unconstitutional executive actions.  One such action by the Obama administration is a permanent ban on offshore drilling in broad parts of the Arctic and Atlantic coasts.  According to the Democrats, they believe Obama is allowed to ignore Congress and go it alone on this because of the Outer Continental Shelf Lands Act of 1953, which says the president “may, from time to time, withdraw” federal waters from oil and gas development that are not already leased. It was announced as part of a joint action with Canada, where communist and Muslim appeaser Prime Minister Justin Trudeau also made a long-term, though not permanent, commitment to protect the Arctic from drilling.

Obama cited the Arctic’s “unique ecosystem,” the left-wing perception of a risk of damage from a spill, the alleged high cost of working in the remote and frigid region and concerns about, you guessed it, the man-made climate change myth.

“It would take decades to fully develop the production infrastructure necessary for any large-scale oil and gas leasing production in the region – at a time when we need to continue to move decisively away from fossil fuels,” the president said in a written statement.

Obama is trying to use any last ditch efforts he can to counter any plans by the incoming Trump administration to vastly expand energy extraction by fossil fuel companies.  Trump has not been shy about his intentions to pursue new domestic drilling.  In fact, his nominations for key cabinet posts are persons who share his enthusiasm about opening up domestic energy projects, showing how serious Trump is regarding pursuing divorcing the United States from foreign oil dependency.

Unlike past presidents who used the excuse of the 1953 law to issue temporary bans, Obama’s action is designed to impose a permanent drilling ban he claims can't be undone by any future president.

A senior administration official said that the White House is “quite confident” that the decision will not be able to be undone by Trump, noting that the law specifies no provision for reversal.  The official suggested that overturning the ban could require years of legal action and the passage of a bill in Congress.

Constitutionally, there is no such thing as a permanent executive action, or government action.  Obama is not king, and the government is not under a totalitarian regime that cannot be challenged.  The rule of law always provides the opportunity to reverse governmental blunders.  Laws can be repealed, unconstitutional rulings can be made null and void, and constitutional amendments can be reversed.  The Democrats simply believe the Trump administration does not possess the testicular fortitude to follow through with such actions.

The Democrats say the 1953 law states a presidential order that explicitly states that it is intended to be permanent, and is designed to address an “articulated purpose,” would likely stand up to legal challenges.  However, the 1953 act is a law, and laws can be repealed by Congressional legislation.  Yes, it would require the passage of a bill, but why would that not happen with the current red-leaning make-up of the United States Congress?

Trump has also suggested he plans to walk away from the international agreement on global warming Obama signed with other countries in Paris last year, as well as scrap the Obama administration’s misguided effort to curb greenhouse gas emissions from U.S. power plants.