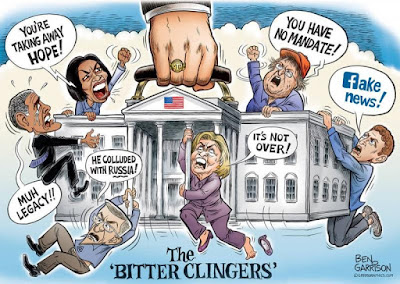 The liberal left Democrats can't figure out Donald J. Trump.  He functions in such an outside of the norm way that they can't predict his next move, they can't threaten him, and to be honest, they don't even understand him.  There is a political protocol, a set of rules for rulers, and an establishment standard that Trump cares nothing about.

CNN said it best with the headline:  Trump is Appointing People Who Hate the Agencies They Will Lead.

Trump spent his campaign denouncing the totalitarian tactics of federal agencies, and then is in the process of proposing to appoint persons to head those agencies who have been among the biggest critics of those agencies.   In some cases, the persons who are being nominated have voiced they believe the agency they are going to be the chief of shouldn't even exist (if they can muster enough memory to recall the name of the agency in a speech).

It's a great move.  How else do you slash and burn federal regulatory intrusion into State Sovereignty?  Infiltrate, and change the problem from within.  Personally, I would like to see many of the unconstitutional agencies reduced, reformed, and then eliminated under the Trump administration.

What is the liberal left Democrats going to do about it?  Trump won the election, beat their attempt to soil the Electoral College, and they simply don't know what to do next except try to be as disruptive as possible.  And the great part about it is that Trump will recognize the desperation, and call it out for what it is. . . whining, crying, and a desperate attempt to attack Trump because the Democrats have no acceptable policy stances - and they are not willing to change.

A part of the reason the Democrat liberal left establishment doesn't know what to do is because Trump is like no other politician. He is unorthodox.

For decades the Republican consultants have been telling GOP candidates and politicians that conservatism loses, and being strong and loud offends the voters who sit on the fence.  The conventional wisdom is that left-wing voters always vote Democrat and right-wing voters always vote Republican, so a person has to move to the middle to attract the ever-important moderate voters.  The problem is, the conventional wisdom is wrong.

Most independents are not swing voters.  Most are conservative, and they don't usually vote because the Republican is often too close to the opposition to be worth a damn.  Many Democrat voters are also conservative, but vote Democrat because they have been convinced that all Republicans are racist, evil bigots.

The propaganda of the Democrat Party is pretty effective on the ill-informed.

However, when a candidate is able to deflect the rhetoric effectively, and rejects moving to the center and promotes right-of-center ideals instead, with the majority of the country having conservative values, the candidate is destined to win.

When looking at the business-as-usual activities of politics, that is a part of what makes Trump so unorthodox, and a winner.  He refused to give in, and on top of that he says what's on his mind.  He's genuine.  He may not be fully conservative in the minds of some critics, but he sounds like he wants to be, and he sure as hell is picking the people around him that screams conservatism.

That is outside the usual playbook that the Democrats have forced the GOP into.  Rather than getting trapped in the corner, Trump has used unexpected techniques, has refused to relent on the conservative angles he's been voicing, and Trump has essentially told the media to kiss-off.  Instead of using them for every little thing he has to say, as President Obama did, he's announcing pretty much everything on Twitter.

It pisses of the leftist media to levels they can't even explain.

So, while the leftists complain about how Trump is outside the system, and he can't possible be any good because he's unlike anything that has ever emerged on the political scene, the truth is, that is exactly why Trump's supporters like him.

-- Political Pistachio Conservative News and Commentary
Posted by Douglas V. Gibbs at 10:08 AM