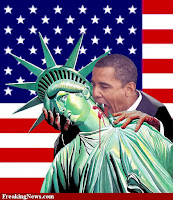 The Democrats and leftist media calls anything that they don't agree with politically "fake news."  They have this attitude that they believe in freedom of speech, and freedom of the press, as long as it fits their narrative.  Otherwise, it must be censored, and silenced.

The liberal left has always accused the Republicans, Christians, and everyone else they disagree with, of being book burners and suppressors of the truth, of the vote, and of anything else they can come up with in their drive to find the perfect propaganda.  In reality, none of that has ever been true.  In truth, the Democrats and the liberal media were simply projecting.

The leftist establishment are socialists.  They are Marxists.  Therefore, their playbook is the same as the proponents of socialism like Karl Marx.

Among Marx's more famous quotes: "The meaning of peace is the absence of opposition to socialism."
In George Orwell's book, 1984, The Ministry of Truth was the propaganda ministry.  It was the job of the governmental office to falsify history and events when they did not fit the government's narrative, and to

introduce "newspeak" so as to make sure the language used was acceptable, even when it was contrary to the truth. "WAR IS PEACE," "FREEDOM IS SLAVERY," "IGNORANCE IS STRENGTH." Orwell's own version of political correctness.

The Ministry of Truth ensured that the news media only reported the facts as the government wanted them to be reported, ensured the entertainment industry only produced productions approved by the government, ensured the fine arts it the mold prescribed by the Ministry, and ensured the educational books taught only the history the government wanted taught.  The Ministry of Truth rewrote history to change the facts to fit Party doctrine for propaganda effect, and control all information for the purpose of maintaining the illusion that the Party is absolute. It can never make a mistake, and no communications or information may ever imply weakness of the Party.  To maintain power the Party must seem eternally right and strong.

Countries like Germany are in the process of creating their own "Ministry of Truth" in the wake of the Democrat Party spread rumor of "fake news" during the American 2016 Election.  Facebook is in the process of employing an army of liberal left fact-checkers so as to combat fake news, and censor out any news that does not fit the liberal left narrative.

The Obama administration is in the process of creating America's "Ministry of Truth."  According to Zero Hedge, it's called the "Countering Disinformation And Propaganda Act"- which is a part of the 2017 National Defense Authorization Act (NDAA) - and which Obama quietly signed into law.

In a statement, Obama said that:  "Today, I have signed into law S. 2943, the 'National Defense Authorization Act for Fiscal Year 2017.'  This Act authorizes fiscal year 2017 appropriations principally for the Department of Defense and for Department of Energy national security programs, provides vital benefits for military personnel and their families, and includes authorities to facilitate ongoing operations around the globe. It continues many critical authorizations necessary to ensure that we are able to sustain our momentum in countering the threat posed by the Islamic State of Iraq and the Levant and to reassure our European allies, as well as many new authorizations that, among other things, provide the Departments of Defense and Energy more flexibility in countering cyber-attacks and our adversaries’ use of unmanned aerial vehicles."

The NDAA, since it is the funding of the U.S. military, always passes.  However, buried deep inside the provisions of the Defense Authorization Act is a little thing that is essentially America's version of the Ministry of Truth.  The Countering Foreign Propaganda and Disinformation Act of 2016 is hidden inside the NDAA, and is a double-down when it comes to the liberal left's war on "fake news."  It was introduced by Congressmen Adam Kinzinger and Ted Lieu, seeking a “whole-government approach without the bureaucratic restrictions” to counter “foreign disinformation and manipulation,” which they believe threaten the world’s “security and stability.”

In short, in the name of protecting us, they will censor us.

-- Political Pistachio Conservative News and Commentary
Posted by Douglas V. Gibbs at 4:19 AM

the "Countering Disinformation And Propaganda Act"-.. just another thing for POTUSE Trump to take apart after Jan 20th. Obama seems to be cluttering up everything possible just to make it difficult for POTUS Trump to get down to business of rebuilding what Obama has destroyed in the past 8 years.