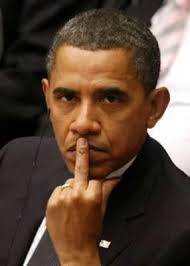 Barack Obama's time is running short, so, he is refusing to be a lame duck, and is doing everything he can to make a massive final push for his top priority items.  As Obama slams through his leftist socialist wish list without any consideration about what Congress may think, the Republicans are expecting a flurry of "midnight regulations" on his way out the door.

Last week the Obama administration blocked future oil and gas leases in swaths of the Arctic and Atlantic oceans (which can be reversed with legislation), granted a record number of pardons and commutations for a single day (because the Democrats know they have much in common with the criminal element, and the criminal element votes Democrat), and he scrapped a dormant registry for male immigrants from a list of largely Muslim countries (he has been doing all he can to aid the Islamic invasion of the United States through Hijrah - Jihad through immigration).

According to Fox News there is also an effort underway to transfer up to 22 additional detainees out of Guantanamo Bay.

Then, there's the reckless decision by Obama and his ambassador to the United Nations (Samantha Power) of abstaining on a Security Council measure condemning settlement activity.  By not using the U.S. veto, it allowed the resolution to pass.

“The things he’s done this week will be turned around,” former House Speaker Newt Gingrich said of Obama on “Fox News Sunday.” “He’s in this desperate frenzy.”

But Democrats are urging the outgoing president to pursue further actions, as the administration weighs its next steps.

Obama will likely unconstitutionally use executive actions to pardon millions of illegal aliens, and provide more clemency for nonviolent drug offenders and others.  I am also thinking he will double-down on his big F-You against Israel and recognize a Palestinian state before leaving office.

In a New York Times op-ed, Jimmy Carter urged Obama to stand against Israel, writing, “The simple but vital step this administration must take before its term expires on Jan. 20 is to grant American diplomatic recognition to the state of Palestine.”

Obama's final plans reportedly include as many as 98 regulations classified as “economically significant,” meaning each would cost the economy $100 million through compliance and consumer impact.

According to an analysis by the conservative American Action Forum, based on the Federal Register agenda, the administration is eyeing $44.1 billion in “midnight regulations” – or rules pushed in the final two months of an outgoing administration.

The U.S. Citizenship and Immigration Services plans to make it easier for employers to sponsor highly skilled immigrants in the country; the Education Department is working on student debt relief at for-profit colleges; and on the financial services side, the Federal Reserve and the Securities and Exchange Commission are working on matters such as executive pay and mutual fund management.

Jimmy Carter urged Obama to stand against Israel, writing, “The simple but vital step this administration must take before its term expires on Jan. 20 is to grant American diplomatic recognition to the state of Palestine.”
Statement by the "Useful idiot".. failed President Jimmy Carter. We all know how well his foreign policy worked out don't we. He allowed 444 days to go by and did nothing in way of retaliation to Iran. It took the election of Ronald Reagan to set the captives free. I will be watching for much the same things to occur once Jan 20th rolls around and those threatening this country and Israel re-think their actions.