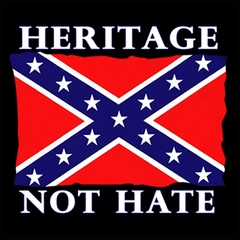 Besides, those who forget the past are doomed to repeat it.

In America, the snowflake liberal left easily offended generation is as nuts as the Islamists.  While I am not in favor of racism, see the history of slavery in the United States as among our great sins, and recognize that slavery and the confederacy were tools of the Democrats, not the GOP, I also recognize the importance of preserving the history of the South's heritage.  As I said already, "Those who forget the past are doomed to repeat it."

In New Orleans, as we've been seeing throughout the South, local authorities are purging its public space of Civil War-era memorials that some say are historically significant and others dismiss as offensive relics of white supremacy.  After drilling into the top of the Battle of Liberty Place obelisk — a marble monument that celebrates the 1874 uprising of a white supremacist militia against Louisiana’s Reconstruction state government — workers in bulletproof vests and masks slowly took the structure apart.

The city also plans to remove statues of three Confederate leaders — Robert E. Lee, Jefferson Davis and P.G.T. Beauregard — after months of vigorous protest from historical preservation and Confederate groups who say the city is sanitizing its history.

“The removal of these statues sends a clear and unequivocal message to the people of New Orleans and the nation: New Orleans celebrates our diversity, inclusion and tolerance,” Mayor Mitch Landrieu said in a statement, adding that city officials would seek to place the monuments in a museum.

“This is not about politics, blame or retaliation. This is not a naive quest to solve all our problems at once,” he said. “This is about showing the whole world that we as a city and as a people are able to acknowledge, understand, reconcile and, most importantly, choose a better future.”

The Stone Mountain Confederate memorial in Georgia, a vast carving of Jefferson Davis, Robert E. Lee and Thomas J. "Stonewall" Jackson on horseback, is the largest and most epic memorial to the Confederacy. The entire carved surface is larger than a football field.  I visited the site in 2002.  It's pretty impressive.

While the park's memorial status is protected by Georgia law, the carving came under attack in 2015 when a Georgia NAACP leader called for the sculpture to be sandblasted, and the Atlanta City Council passed a resolution asking Gov. Nathan Deal to appoint a study group to consider adding other significant figures, such as the Rev. Martin Luther King Jr. and former President Carter.

The South is full of hundreds of confederacy reminders, a sign of heritage, not hate, argue some.  The statue of Nathan Bedford Forrest, a Confederate lieutenant general and reported early leader of the Ku Klux Klan, in Tennessee has been vandalized, with "Black Lives Matter" scrawled over the marble in red spray paint.

In 2015, the Memphis City Council voted to remove the statue, along with the remains of Forrest and his wife. Yet the city has been thwarted by a Tennessee law that prevents cities or counties from relocating or otherwise disturbing war memorials on public properties. Last October, the Tennessee Historical Commission denied the City Council's application for a waiver that would let it relocate the monument.

Looking back throughout history, we notice that free societies do not destroy the past, they seek to learn from it.  Tyrannies destroy the past, and knowledge, claiming that it is offensive, when it reality they are working to hide the things that may reveal to the public who they really are.

What's next?  Are they going to decide that our Founding Fathers were not acceptable, either, and demand that the Washington or Jefferson memorials should be torn down?  Then, will the war on free speech depart from the universities and become law?  Will being a constitutionalist become a federal offense?

-- Political Pistachio Conservative News and Commentary
Posted by Douglas V. Gibbs at 6:38 AM

Today it's New Orleans. One day soon it'll be the Sam Houston monuments in Texas. The ultimate goal of destroying history is to destroy a community.

Iconoclasm has a long and tawdry history. Whether it's firing rounds at the Parthenon, or toppling the Moai on Easter Island, a sense of disappointment that knows no borders is always shared by future generations.

Well preserved art is one of the best instruments for people to really understand history with all of their senses. After I took an art history course as an elective one semester, I was really surprised by how much my sense of continuity between disparate historical events was improved. Art is a common thread that can be drawn across generations. To destroy it is to fray that tapestry and impoverish us all.