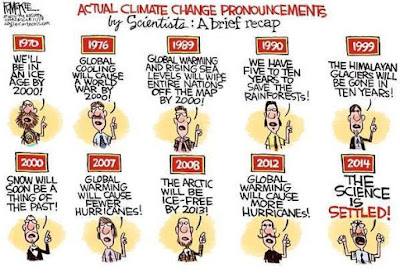 Religious extremists can be violent, be they Islamic extremists, progressive extremists, or environmental extremists.  For extremists, the consequences for dissent is death.

Shots were fired at the fourth floor of the science and technology center at the University of Alabama-Huntsville hitting windows adjacent to climatologist John Christy’s office.

Three bullets hit windows, while four hit the side of the National Space Science and Technology Center. An incident report was filed after building staff discovered shards of glass Monday morning.

Christy is a well-respected climatologist who’s spent decades using satellites to measure global temperatures. He is considered a skeptic of man-made global warming, and environmentalists and left-leaning scientists have attacked him for challenging the credibility of climate models.

While police say the shooting looks to be random, Christy’s colleague, Dr. Roy Spencer, said it’s “more than coincidence” that shots were fired around Earth Day.

“Given that this was Earth Day weekend, with a March for Science passing right past our building on Saturday afternoon, I think this is more than coincidence,” wrote Spencer.

“When some people cannot argue facts, they resort to violence to get their way,” Spencer wrote in his blog. “It doesn’t matter that we don’t ‘deny global warming;’ the fact we disagree with its seriousness and the level of human involvement in warming is enough to send some radicals into a tizzy.”

“Our street is fairly quiet, so I doubt the shots were fired during Saturday’s march here. It was probably late night Saturday or Sunday for the shooter to have a chance of being unnoticed,” Spencer noted.

-- Political Pistachio Conservative News and Commentary
Posted by Douglas V. Gibbs at 9:53 AM